Update: We no longer recommend this VPN due to various reasons. We recommend various other providers listed here!

IPVanish a VPN consisting of 110+ servers in 47 countries, thousands of active users, and plans starting at only $10.00 per month. IPVanish is a large VPN network that offers a simple list of features. With no Windows client, IPVanish offers security with no add-on programs. While using IPVanish VPN we utilized the VPN provider on our Flashrouters router.

IPVanish VPN offers three very simple plans. A one month, three month, and one year VPN subscription. All three plans come with the same features. One flat rate for the same features is what the Freedom Hacker Team personally prefers. One should not be limited or have to pay erroneous prices for extra privacy or security. IPVanish’s three time based plans start at only $10.00. 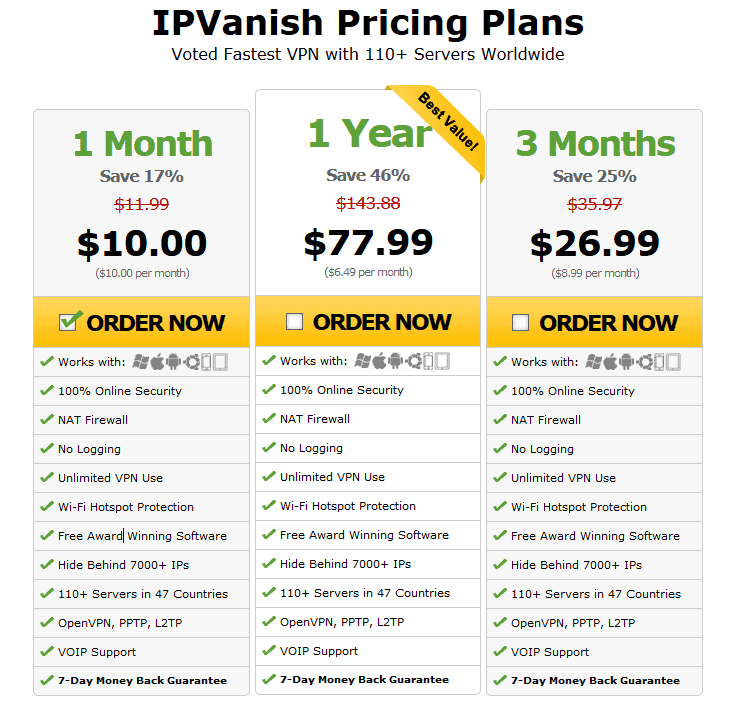 IPVanish VPN had overall great speeds. With 110+ servers, there is sure to be one close by, or one that fits your desires. IPVanish VPN did have few select servers that I could not peek past 100KB/s on. I did not contact support, but I noticed very few servers did this. Most locations have multiple servers, such as New York. New York may have three different servers one can connect to. If server one gave the 100KB/s speed, New York server 2 would worked just fine. I did not contact support regarding some deathly slow servers, but I did note some servers to be slow even when revisiting the location at a later date. IPVanish VPN did offer great speeds and extreme reliability on the router. Never once did my connection drop, buffer, or give issues. Almost every server across the network gave speeds that were very desirable. Streaming was no issue with the VPN. Sometimes VPN speeds would drop significantly when downloading larger files, but the speeds would be back up and running within a few minutes. The VPN did not cause noticeable speed issues, but some flares did arise. Again, I did not contact support regarding some speed flares, or server issues, but I did notice from time to time some issues arising. Overall IPVanish speeds were great and very desirable for daily use.

While IPVanish VPN claims they do not log what users on the VPN do, there have been reports of IPVanish subscribers receiving valid DMCA requests, and possible account terminations. Threads arise time to time on the IPVanish forum asking the same question, “Why do users receive DMCA requests on a VPN that doesn’t log?”

Since there are so few users marked across the 7,000 IP’s, users can be easily identified and sent a valid DMCA request in real time. Many state VPN’s that don’t log, or refuse to forward DMCA requests to users are in direct violation in the law. This is untrue, and many privacy based companies do comply with DMCA requests but do not forward them to users, as they cannot identify who is infringing on the file. As IPVanish does not log or shape traffic, we do find that forwarding DMCA requests to users is a bit off turning.

As the VPN does have great speeds, we feel it falls short for its price. The VPN does not offer OpenVPN on mobile devices which makes mobile security on the go extremely vulnerable. The VPN also lacks some features and does not offer anything extra with their VPN. This would be fine as other VPN’s offer bland to the point features, but IPVanish VPN can also identify which user is using the VPN at every exact moment. While traffic is not monitored or logged, it can be tied to a user so to say.

The Freedom Hacker Team as a whole has mixed feelings over IPVanish VPN. Everyone on the team has mixed reviews due to their lack of users on servers, and forwarding DMCA requests to alleged infringers. We do note IPVanish is located in the U.S.A. and has to comply with U.S.A. laws, but feel IPVanish is not offering users the layer of privacy and security they claim. IPVanish isn’t logging, shaping, or selling any traffic or data which we do find notable. We do find for the price and privacy concerns IPVanish to not be one of the best VPN’s we recommend. While IPVanish provides a layer of anonymity, we do feel there are privacy concerns.

Update: We no longer recommend this VPN due to various reasons. We recommend various other providers listed here!