A secure router is one step to securing your online connections. Many routers have holes, exploits, and are just flat out cheap. These issues may lead to hackers stealing data, exploits begin used against you, or your router overheating. These issues could lead to poor security, and leave you with overall slow performance. If you have decent internet speed, you may not be unlocking the full potential due to having an outdated router, or just not enough power. FlashRouters changes the game, FlashRouters is the key to unlocking full performance, security, and speed.

My Background with Routers

For begin a cyber security enthusiasts, routers was one of my main downfalls. While using a stock router for my ISP I had no idea how to do anything with a router. I didn’t know how to access my admin panel, check my ports, check who was using my internet, or do anything. I just plugged it in, and hoped for the best. Now while using a stock router and having a minimum of 15-20 devices connected 24/7 using bandwidth like water, I ran into many problems. I would run into constant chalky speeds, decreased performance, resetting of my router at least twice a day, amongst many other problems. This wasn’t my internet providers fault as the connections never dropped, and speeds would get chalky only when a lot of devices were begin used. For a stock router, 15-20 devices is a lot to handle. Now while having no previous router experience, FlashRouters changed everything.

While initially finding FlashRouters, I had no previous experience. I had seen routers at big box retailers, but some ran $300+ dollars. In this day, that is not quite cost effective for what I was looking for. While first seeing FlashRouters I was a bit hesitant with all the DD-WRT, and Tomato routing terms. Looking them up a bit, I had an idea, but not sure what router was for my needs. While studying cyber security and just browsing the web, I am always using a VPN 24/7. I went ahead and opened a support ticket asking what would be the best VPN router, to handle intensive bandwidth sessions 24/7. I was met with a blazing fast response from the support team. They informed me on what would be best, and a little information about the firmwares. We continued chatting, and found a resolution for my needs, the Asus RT-N66U Router TomatoUSB FlashRouter – RM. The support desk informed me that tomato firmware runs OpenVPN protocols better than DD-WRT. During checkout I noticed I was only able to choose one VPN provider from the list, while I use a large amount of VPN’s I had send in another support ticket. The only reason FlashRouters asks what VPN provider you use, is so they can send you the setup instructions for that VPN. Setup instructions can be found on the VPN providers website, FlashRouters does not host the files for numerous reasons. While choosing a common VPN provider I continued my checkout. In the notes I left a large list of VPN providers I use. The checkout was simple, and my order was sent out the day of.

Upon delivery instructions to almost all the VPN’s I had listed were in the box. The instructions are very simple, and allow for a seamless setup. Upon arrival I opened my VPN router and was met with a Ethernet cable, the router, and the power cord. After plugging everything in I noticed I did not have Ethernet ports in my wall. In the end I had to end up hooking up my new router, into my old router via an Ethernet cable (I was informed this does not decrease performance by a noticeable amount). 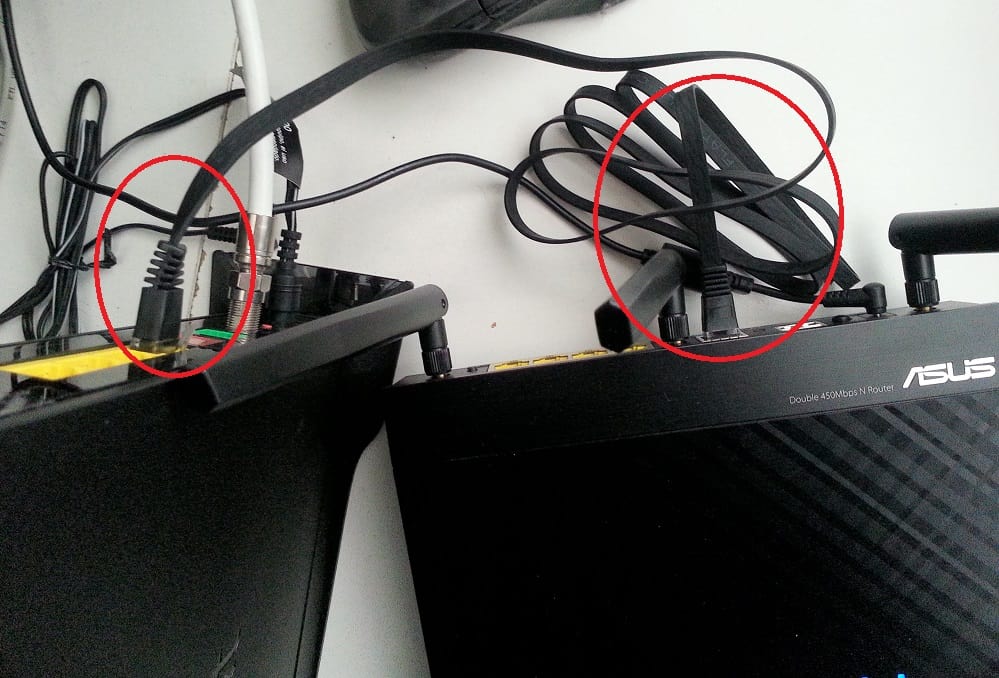 Upon setup I had gone into the admin panel and broke a setting (I went to far into a panel I didn’t know). I contacted FlashRouters support, they connected to my computer remotely, helped me reset the router, plug everything in, and get it up and running. While connected I asked them to help me set up a VPN. Sure enough, the support setup the VPN within just a few minutes. Once disconnected everything was up and running.

Coming from a stock router to the FlashRouter there was a noticeable difference. FlashRouter speeds were impeccable. Connecting all my devices to the new network was simple. Just type in the password I personally set, and the internet was working fine. While the Asus RT-N66U Router TomatoUSB FlashRouter – RM is quite large, it can handle a beating. While continuing my usual activities of streaming, blogging, browsing the web, amongst hundreds of other tasks, the FlashRouter delivered nothing but power. Instead of having to reset the router, or sit through capped speeds due to to many devices, I was met with no issues. The FlashRouters took a lot of issues out of my web browsing experience. Not only did it take the pain out of my online experience, it also saved me a lot of time and troubleshooting with VPN configuration. While VPN setup is simple on the computer, VPN setup is NOT simple on consoles, streaming devices, and some mobile devices. Amongst the following, it is also not easy to get others to use a VPN while on your connection. The FlashRouters built in OpenVPN configuration simplified it all. While sticking a fast VPN provider onto my router, I was met with security, and speed. Having devices stream through the VPN by default took a lot of hassle off of security. While not only taking the hassle off, it routed everyone that joined the networks devices through the VPN. FlashRouters delivers promising performance, while maintaining security.

While not having a tomato based router in the past, I am not completely sure what the admin panel would entail, but the FlashRouters panel is very simple and easy to work with. 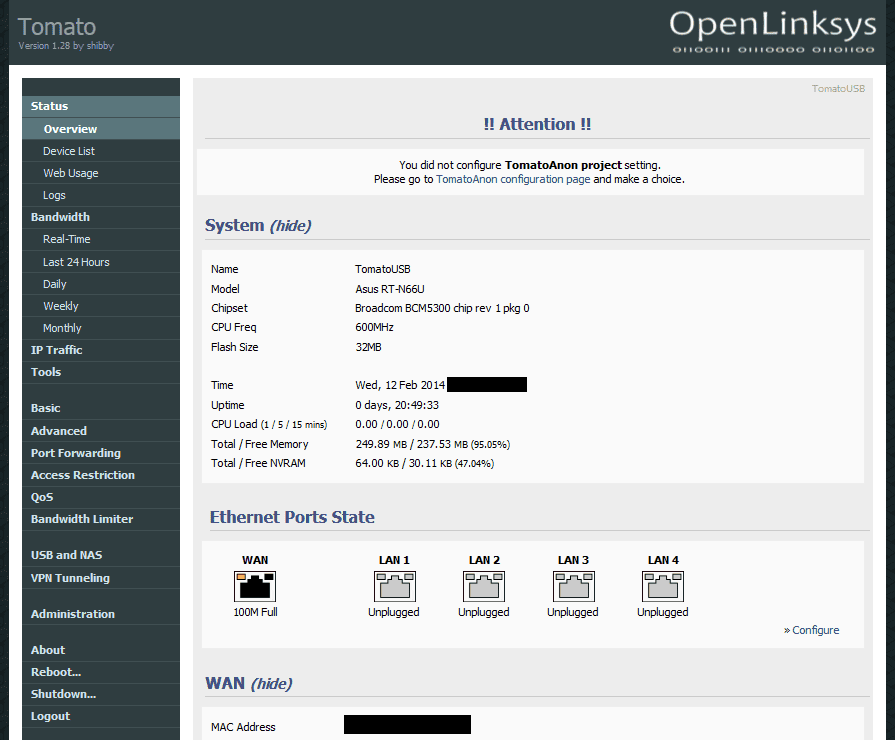 While I am not using the router for anything intensive at the moment, all stats are labeled right on the initial entrance page. Uptime, day, the load on the router, along with a couple of other notifications. While in the Admin panel you can check what devices are using the router, this can help and prevent unwanted access by removing the user from the network, or changing the password. The admin panel has great features some including, how much bandwidth you use (live, daily, weekly, monthly chart), easy port forwarding, bandwidth limiter, VPN tunneling, and reboot right from the admin panel. The admin panel is easily accessed by anyone on the network. Enter 192.168.10.1 into any browser, enter the custom username and password (default is: admin, admin), and the admin panel is easily utilized. It can be accessed on mobile, tablets, and computers. The router can be reset wirelessly by accessing the admin panel too. Which makes setting up a new VPN, and rebooting the router simple.

While FlashRouters is based on routing power, its also based on security. FlashRouters has numerous security features. The best one begin the ability to route the whole router through a VPN. While not only allowing a VPN to route through the router, FlashRouters allows PPTP, and OpenVPN protocols. The OpenVPN protocol is the only realistic choice, as it is far more secure. On top of the VPN routing, the admin panel is extremely easy to use. The admin panel allows for users to set their own passwords, and different passwords for initial login, network line 1, and network line 2. Instead of having to remember a long set of numbers, a custom secure password can be set. FlashRouters security enhancements are a step up from traditional routing.

Flashrouters has a stellar support team. With friendly, fast, and professional technicians, the ticket system is unbeatable. FlashRouters will not only help you set up and configure the router fully, but set up and configure all VPN’s. As long as your router has support, the company will set up the router for you. FlashRouters comes with 3 months of support for free, and it can be extended if desired.

Overall starting from knowing nothing about router security, to getting a security based router, there is a difference. FlashRouters not only simplified my routing experience, but made it painless. No more chalky speeds, having to reset the router, or having to custom configure VPN’s for separate devices, the FlashRouters does it all for me while adding a layer of security. With very friendly price points you cant go wrong with a FlashRouter. FlashRouters is defiantly a must have router.