blackVPN has over 12 servers and 4 different packages. blackVPN is located in Hong Kong, mostly known for housing whistle blower Edward Snowden during his leaks. blackVPN says “In 2012 we moved the company to Hong Kong to avoid secret court orders to install backdoors & monitoring.” Edward Snowden fled to Hong Kong for free speech traditions. Snowden said “Hong Kong has a strong tradition of free speech. People think China, Great Firewall … but the people of Hong Kong have a long tradition of protesting on the streets, making their views known … and I believe the Hong Kong government is actually independent in relation to a lot of other leading Western governments.” Hong Kong seems like a very trusted place to reside, and for a privacy company to do their business. Now lets get to the blackVPN Review.

blackVPN is one of the few VPN providers that knows how to keep it simple. They use the very simple and easy to use OpenVPN client for every device. OpenVPN works on Windows, Mac OSX, Linux, Android, iDevices, and much more. blackVPN takes advantage of OpenVPN’s security measures and utilizes them in all ways possible. They do not use any special clients, or any special features. They don’t have any gimmicks, junkware, or snitchware on their site or in the OpenVPN client. They keep it simple and secure with OpenVPN. They do offer L2TP/IPSec and PPTP, but almost everyone knows those protocols are a joke and do almost nothing. blackVPN also offers a number of different VPN packages for all of your needs. 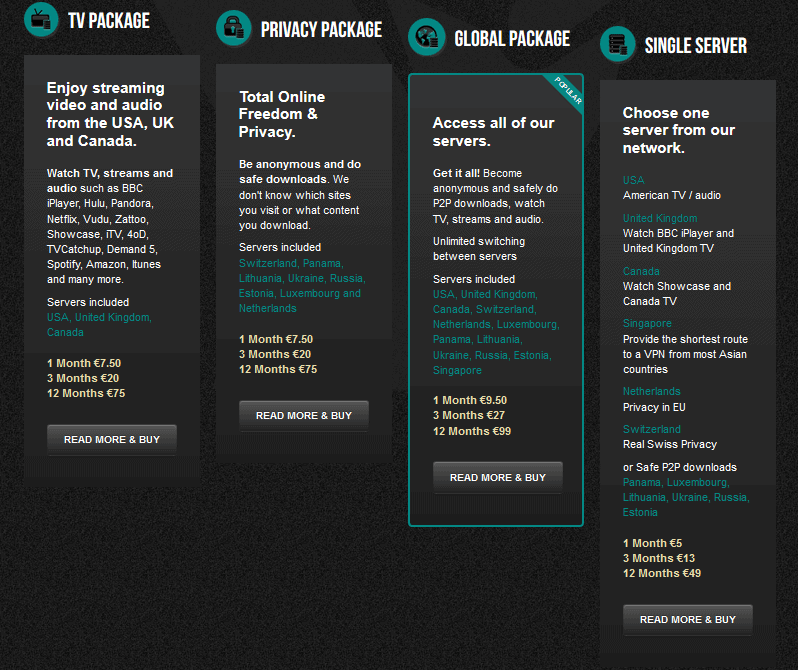 If you just want a VPN to stream TV or blocked websites, then you can grab the TV package. If you want to be anonymous and enjoy P2P then you can grab the privacy package. And if you are feeling like you want the all in one, you can grab the global package. You get access to all servers, and all features. Another really cool feature I saw was ordering single servers. They allow you to order a single server package for a very low price. Some VPN providers only offer one location for unreal prices. But blackVPN lets you choose what package, and what server you want (if you just want one) for a low price. blackVPN was kind enough to allow us to test their global package features, along with their new service TOTAL = TV + Privacy . Your always-on VPN. This package allows

blackVPN does not throttle bandwidth, allows P2P (on P2P servers), and allows unlimited streaming. It sounds like the all in one,  but is it to good to be true?

The speeds for me were top notch. On all of my devices, Mobile, Android, iDevice, and computer I was getting full speeds. %99 of the time I will run into problems streaming videos on my mobile devices with VPN’s. Most of them usually cut out, buffer, drop, and are unreliable. No matter what server I was on, I was getting top notch speeds. I used this VPN all throughout the weekend, and on weekdays. I did not notice at any times my speeds fluctuating. Some providers connections slow down when people get off of work, or when a mass amount of people come online. I did not experience that at all. Throughout the day and night my VPN speeds were great. The USA, Canada, and UK servers brought me the best speeds as I am located near all of those. Obviously if I am going to connect to Estonia, or Luxembourg halfway across the world I will not get full speeds. But I really loved the speeds on my mobile. That was the best part.

I don’t usually do this, but this VPN had a feature I really enjoyed. We all know on iDevices how unreliable the settings>vpn option is. On the iPad, iPhone, and iPod the connection always drops, and it only offers L2TP, PPTP, and IPSec. blackVPN is one of the very few providers to date to offer the OpenVPN solution on iDevices. blackVPN allows you to download the OpenVPN app from the appstore, connect your device to your computer, transfer the OpenVPN config over, and use OpenVPN on your iDevice. While using it I was experiencing full speeds along with total anonymity. I was not getting any DNS leaks, and the VPN did not drop till I turned it off. The VPN would turn right back on the second I unlocked my device. Even the big players do not offer OpenVPN on mobile. PPTP, L2TP, IPsec, and most other protocols are a joke. %99 of the time on mobile you are walking around with no protection. blackVPN fixes that.

There will always be features in every VPN you won’t like. My main problem with this VPN is (update, they now allow three concurrent connections). I Also, when asked “Do you guys log? UK/US/SG Servers: Although we do not monitor the traffic, incoming or outgoing connections of our users we may assign users to a unique IP address and log which user was assigned which IP address at a given time. If we receive a copyright violation notice from the appropriate copyright holder then we will forward the violation to the offending user and may terminate their account. We therefore ask our users not to distribute or transmit material, which violates the copyright laws in either your country or the country in which our Service is hosted.” That isn’t really a big deal as your traffic isn’t logged, so you should be pretty safe. But I also like that they are honest. I have seen hundreds of VPN companies lie about their logging policies. Its better to be %100 sure, than to just be told “No.” In an a VPN interview, one of the main reasons they do this is “It’s a balance between protecting peoples privacy while preventing our TV servers from being shut down due to DMCAs.” They want to keep TV servers up and running at high speeds, and not have the data centers cut off their services.

Overall blackVPN was a win for me. I would recommend this VPN. The speeds are great, and they allow a nice amount of locations. They offer P2P, and streaming at high speeds. OpenVPN is my biggest attraction towards this VPN. But overall the speeds are top notch, and it is a great VPN service. I really do enjoy their other packages, and the VPN has a fair price for its features. You need to remember, this VPN is not based in the USA. You are paying for privacy. Personally I am neutral on whether VPN’s in the USA are safe or not. I will give all VPN’s a chance, and base them on other reviews, and my own review. But them begin based in Hong Kong is great. This allows for optimal freedom. I can recommend blackVPN.