Proxy.sh has over 40 countries, 200 nodes, gigabit speeds, and 4 different packages, all starting at five dollars per month. Proxy.sh operates under the Republic of Seychelles legal jurisdiction. They are an offshore based company. In our proxy.sh interview they said “We are operating from the Republic of Seychelles and our staff is in the cloud, mostly from Eastern Europe, Asia and Africa.” Offshore companies are always great (they have their downsides too). Proxy.sh allowed me to test their solid package. Now lets get to the proxy.sh VPN Review. 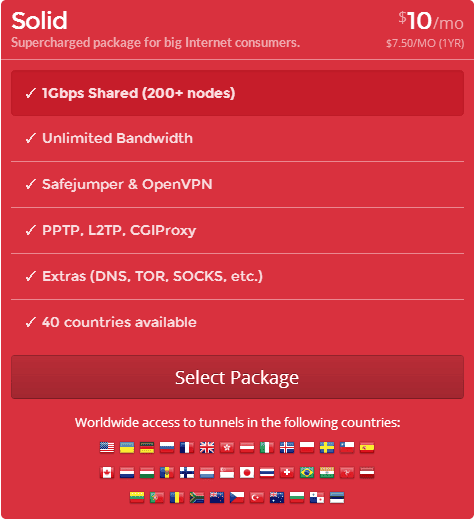 Proxy.sh has a couple of features. They also keep their VPN client/s simple and easy to use. Proxy.sh allows for you to connect your services to the TOR network. They have it so you can connect to your proxy.sh account over the TOR network (your home IP doesn’t touch the VPN account). They also allow you to use proxy.sh as a TOR exit node. That way you know what exit node you are connected to. And they also have a free non logging DNS servers you can connect to (you can use them even when not on the VPN). They have a lot of configureability with TOR, and flex the OpenVPN concept. They also allow you to hook socks5, and http proxies onto your VPN. The VPN keeps it simple with two client options. OpenVPN client, or their custom safejumper client. The OpenVPN configuration is simple, and the usual procedure. The SafeJumper client is also simple. You just run the windows .exe and it opens up. The client is okay, its a little buggy when in the tray, but if the client is open its great. And %99 of the time, you aren’t going to look at it if its in the tray. Here are some pictures of the proxy.sh VPN windows client

The client is very user friendly. It has all the locations, their server load, and the ping, available right on the client. It lets you choose TCP (more secure), or UDP. And it has a couple of options in the Advanced settings area. When you click connect it goes into your tray, downloads the server configuration and connects. It takes a couple seconds to connect, but after that you are ready. I really do like the client, as all locations are listed there with the network load. They also offer OpenVPN on mobile which I am a huge fan of. This allows users to bypass the cheap PPTP, L2TP, and IPSec options that Apple gives you via settings>VPN. This also allows for more secure connections on your mobile device. If you want to see up to date server locations, they also have a network map (here). They also have the network status of their VPN nodes (here). Proxy.sh has some nice features whilst maintaining a professional service.

The speeds on proxy.sh were not very fast. I seemed to get a third of my internet speed shaved off, if not more at times. I could still stream, but the speeds were not great. They didn’t seem able to handle my bandwith intensive tests. It seemed my internet was always lagging behind no matter which server. Even if the server was near me, or half way across the world, the speeds were not that great. I was still able to stream most videos. When streaming HD though, it had quite a bit of lag and struggle keeping up. The speeds also seemed to fluctuate back and forth. Videos would load very quick, then slow down, then repeat. But on my mobile, the streaming was fine. I received minimal lag. A few hiccups here and there, but overall streaming was fine on my mobile. I tried this on TCP and UDP.  I was not impressed with the speeds.

This question has come up a lot recently since proxy.sh posted this 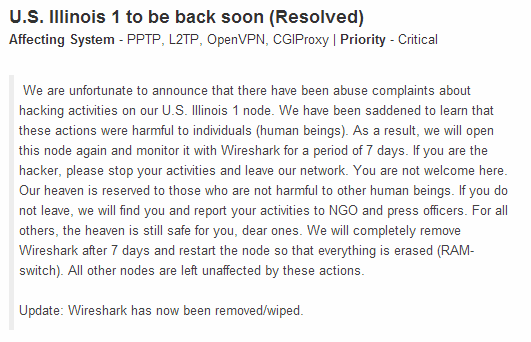 The simple answer is no. They only sniffed one US Node for 7 days. Torrent Freak has a great article on it here. In the above claim, they say it harmed actual people. I don’t know the story, but it just seems proxy.sh wanted to keep that node, and take the hacker off. It is nice to see that the VPN company told us. They didn’t lie, not tell us, or sweep it under the rug. This is just more assurance that they don’t keep logs, even on their U.S. server. I feel they didn’t need to do this, but this can also ensure more trust in users. I also feel they shot themselves in the foot though. Monitoring on a “non-logging” VPN seems wrong. But no one got hurt, and they were doing what was best for their servers.

Overall the service was okay. I am not sure if I would recommend this VPN for the price. They have a huge number of locations which is great, but the speeds are not optimal.  They have many servers, and if you live in a bizarre location, and they have one near you, pick it up. You can always try it for two dollars. But overall, the service was okay. It wasn’t the best service I had used, but it wasn’t horrible. Click here to take a look at the proxy.sh website, and VPN packages.