BlackVPN, the Hong Kong-based VPN provider who identifies themselves as a “premium VPN service” has packages starting as low as $6. BlackVPN has a smaller limited server selection only allowing users connect to 12 countries, but the service makes up for in terms of speed. Below is the full 2014 blackVPN review. Below, also featured is the blackVPN 2014 VPN router review.

BlackVPN is a quite simple Hong-Kong-based VPN provider. The service offers few features or gimmicks, leaving the service to be quite barebones and hard to get excited over.

While the lack of features advertised may seem a bit boring, blackVPN excels in nearly all other areas of the VPN service. Security and privacy, speed, among other features are gone unseen before purchase and usage of the service.

Global is just as it sounds, the service allows you to connect to all the company’s VPN servers, 12 countries, offering the ability for fast streaming, downloading bittorent safely, and having the ability for blazing fast speed regardless of your location.

TV Package is also right up to par with its name, allowing you to stream content from the fastest VPN servers the company offers. While P2P or bittorrent is not supported in these packages, the TV package is for dedicated streamers and for those users who may wish to unblock geo-locked content. The TV package serves only the fastest streamers with popular unrestricted servers.

The Privacy package also serves right up to its name, offering only privacy-based connections. The Privacy Package offers secure bittorent downloading, while allowing you to only connect to select countries with strong privacy laws. The privacy package is dedicated for users who wish to sacrifice speed for personal privacy.

BlackVPN speeds throughout nearly every server were impeccable. While testing blackVPN on their supplied router, we found speeds to be blazing fast, and almost suffered no drop in speed. In servers ranging so much as a few counties away, we found speeds to only drop 100KB/s max. We found blackVPN to be nearly unrealistically fast while knowing that their service also utilizes top level encryption.

During our blackVPN review, we found the VPN to come to near slow, stopping rates during random peak hours. Throughout months of testing, we found this slow speed to occur nearly 2-3 times a week. The hindered speed lasted no longer than a half hour each time, usually regaining speed within 10 minutes. We only found this to occur during peak hours, but found it to be consistent throughout nearly all servers. Nothing severe as speed was quick to replenish.

BlackVPN offers top notch speed, throughout their global servers. The router and VPN easily streamed HD content while serving multiple devices at one time. BlackVPN can defiantly take bandwidth intensive sessions for countless hours with not so much as 50-100KB/s drop in speed. BlackVPN earns five stars in the speed department!

BlackVPN’s lack in features is largely due to the fact they use OpenVPN by default with no other OS-based client for any operating system. While blackVPN offers L2TP and IPSec, they strongly recommend and utilize OpenVPN wherever possible.

In blackVPN’s terms-of-service, the company claims to never log the real IP address of their customers, never keep any traffic logs, and only keep a timestamp of when the user connects, disconnects and bandwidth used. While blackVPN claims to “never log” a users real IP address, customers external IP address is logged to deal with apparent hacking and spam attacks and to also comply with copyright violations on their USA, UK, and Singapore VPN locations. Such data is logged for 7 days on their Privacy package and 30 days on all other locations.

BlackVPN’s terms state they have the ability to pinpoint users distributing copyright material through their service. If the company gets a copyright notice, blackVPN can pinpoint the user forwarding them the notice or terminating their account for such violations.

While blackVPN claims to never log the real IP address of customers, we find the fact that they have the ability to forward copyright violations to ongoing customers a bit weary and not so private.

Clearly the Asus RT-AC56U has a bit of power housing an 802.11ac chipset that gives the concurrent dual-band 2.4GHz/5GHz at an amazing speed. In the company description, blackVPN says the router can get up to the max speed of 25+ Mbits/s, which we found a bit low compared to other routers not relying or noting any caps.

The blackVPN router was extremely fast during testing, and the router can defiantly handle a bandwidth beating, holding numerous connections throughout a number of devices. Not only can the router withstand the power, blackVPN can also withstand the relentless bandwidth hogging of multiple devices keeping the internet running blazing fast.

The router is noted to come pre-installed with the open source DD-WRT firmware. The open source firmware is great, and allows for seamless control and editing. While we prefer the Tomato firmware, the DD-WRT was a bit of a change with not nearly as much functionality, but the great open-source firmware allowed for countless panels of information among various features.

BlackVPN team members went ahead and let us know their control panel is a freely available open-source project. The panel is also not hard-coded into the router, it’s simply a static webpage they have made freely available to have the upmost easiest access to their service.

The blackVPN router control panel has to be the easiest VPN router navigation method we’ve seen thus far. Inside the open-source panel, the control panel lets you switch countries, restart the VPN and restart the router with just one click. On traditional DD-WRT panels, to switch countries you need to find the hostname, enter the port, keys and a swath of information. blackVPN’s panel took the hassle out, allowing for seamless integration. 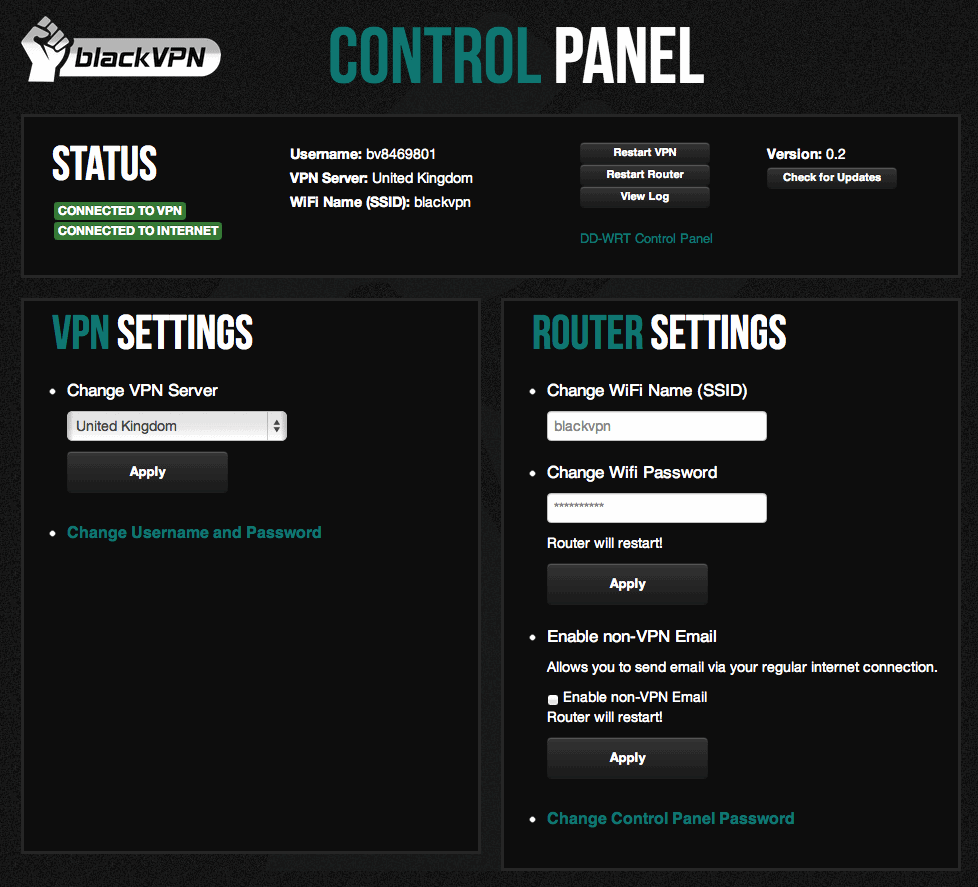 If you plan on being a loyal blackVPN user, their router would be the best option for the easiest usability on the backend with their control panel.

Overall blackVPN offers an exceptional service. The service is great for streaming, but we are not entirely sure how we feel about their privacy as they have the ability to pinpoint users who violate their terms. As well, the VPN router features an open-source panel alongside the average DD-WRT panel which makes navigation a breeze. The router would be highly recommend to loyal blackVPN customers but not strictly to others who wish to test other VPN’s.

Overall blackVPN got a 3.5 stars out of 5 for their terms. We can defiantly recommend this VPN.

Get this blazing fast VPN at 50% off with our Black Friday Discount Code: BLKFH