For denying Syrian citizens the ability to purchase online products, PayPal was hacked by SEA”, “If your PayPal account is down for a few minutes, think about Syrians who were denied online payments for more than 3 years. #SEA

#SEA did not hack eBay or PayPal to access customer data, or gain any access to unauthorized data, the group committed the actions merely for hacktivist reasons. PayPal told Mashable that no ones data was compromised, and the Syrian Electronic Army also noted they did not want anyone’s finical data. The reason for this hack was for denying Syrians the ability to make online purchases with PayPal.
Following these attacks the Syrian Electronic Army had their Twitter account suspend (read here). The #SEA cyber attacks will still continue even with their social media account begin ban. 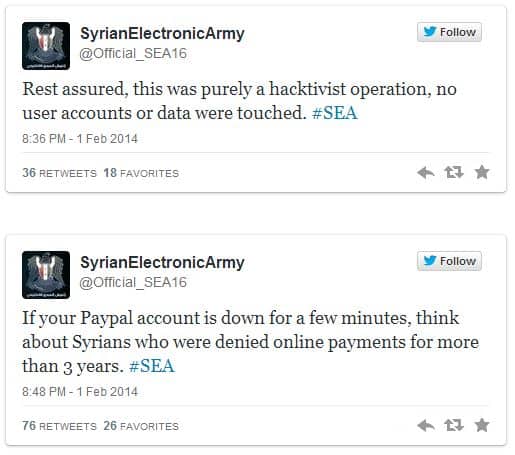 Subscribe to our newsletter for the latest updates on the Syrian Electronic Army.