Syrian hacker, Dr.SHA6H, hacked and defaced two Turkmenistan banks, and several Peruvian government websites. February 7, 2014 Dr. SHA6H hacked several large websites defacing them in the name of Syria. Dr.SHA6H has hacked high profile sites in the past, but this time two banks, and government websites from Turkmenistan and Peru were the target for the cyber attack. The deface hacked page asked for help in Syria along with a YouTube video. The page stated

Today, after looking at what faces ( Syria ) note most of the countries in the world do not want help Syria There are a lot of countries all over the world enter the irrational intervention in the problems of other countries Such as the United States intervened in the problem ( Osama bin Laden ) Why .. !? Now, America and other countries do not interfere in the problem of Syria Is there an international interest with ( Bashar al-Assad ) .. !? Or economic interest or is a political interest ( We do not understand ) .. We want answer all the countries of the world, there are children dying, women raped and houses destroyed . Or the problem is fear of ( Iran ) as we know .. !? Iran today possesses nuclear weapons and does not want to fight America Why .. !? Questions have no answer, but we all know the answer religious racism that put us ( Masonic ) malignant( Did not mean a particular state what I said, but the prompt message for all the world )

Along with a link to the official Dr.SHA6H Twitter. Websites that were affected were

Mirrors of Dr.SHA6H’s deface pages can be viewed.

The Deface page in full appears in full as 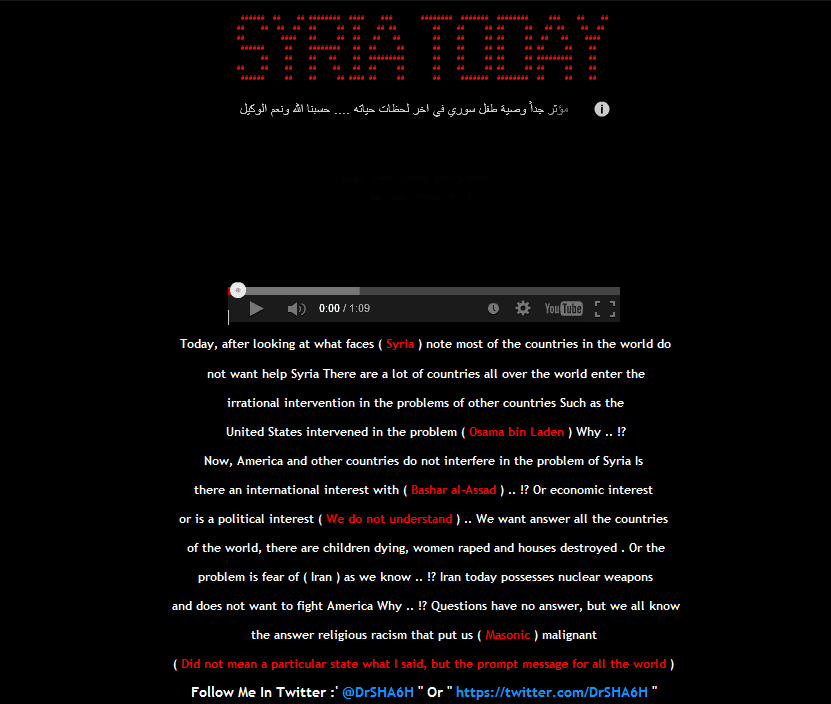