In one of the largest celebrity leaks of all time, a number of starlet celebrities nude photos began circulating over the internet Sunday afternoon.

Earlier this week a post on the popular image board, 4Chan, claimed that starting Sunday, a slew of celebrities nude photographs would be leaked online. Sunday is here and the alleged leaks have begun, and the internet is reacting accordingly.

A “mega list” of celebrities that the hacker is alleged to have access to has been posted online, actresses include Jennifer Lawrence, Avril Lavigne, Kate Upton, Lea Michele, McKayla Maroney, Hillary Duff, Kim Kardashian, Mary Kate Olsen, Rhianna, Selena Gomez, Yvonne Strahovski among a number of others. The photos have begun appearing across the internet on various forums, image boards, and wide spread outlets.

The method the hacker or hackers utilized to gain access to the photos remains unknown, but the images began appearing on 4Chan on Sunday at around 4 p.m.

Throughout 4Chan and Reddit, users speculate that the celebrities were hacked through their iCloud and DropBox accounts, claims have not been verified nor have other methods. One redditor stated in the Kate Upton photoset leak, a sample image from Dropbox was inside the album. Regardless, users who possess the images and videos are reportedly asking for bitcoin in exchange for the release of the content.

On Twitter, one account, that has since been suspended, tweeted that TMZ offered upwards of a six figure payout to purchase a trove of the content. The anonymous uploader posted on 4Chan at 4:13 pm, writing “I’d rather you get them than TMZ.”

TMZ are going to post nudes of like 20 celebs tonight. They are offering the guy who hacked the phones of celebs 6 figure sums to sell them.

The list of celebrity leaks continues to update throughout a number of reddit threads. A small portion of photos the hacker has posted are being outed as fake and removed from the threads. As the list is currently unstable, what has and hasn’t been leaked will pan out over the next couple of days.

Jennifer Lawrence’s representatives confirmed to Buzzfeed that the leaked photos were infact authentic.

Jennifer Lawrence spox confirms authenticity of nude pics to @BuzzFeed, says anyone posting them will be prosecuted: http://t.co/tJ08aVo522

One of the celebrities caught in the leak, Mary Winstead, responded to the leak in her own words confirming the photos were her:

To those of you looking at photos I took with my husband years ago in the privacy of our home, hope you feel great about yourselves.

Knowing those photos were deleted long ago, I can only imagine the creepy effort that went into this. Feeling for everyone who got hacked.

Google searches have followed the growing trend as the actresses confirmed their leaked photos and more appeared online. In less than eight hours, searches for Jennifer Lawrence hit over two million in the Google search trends tab. 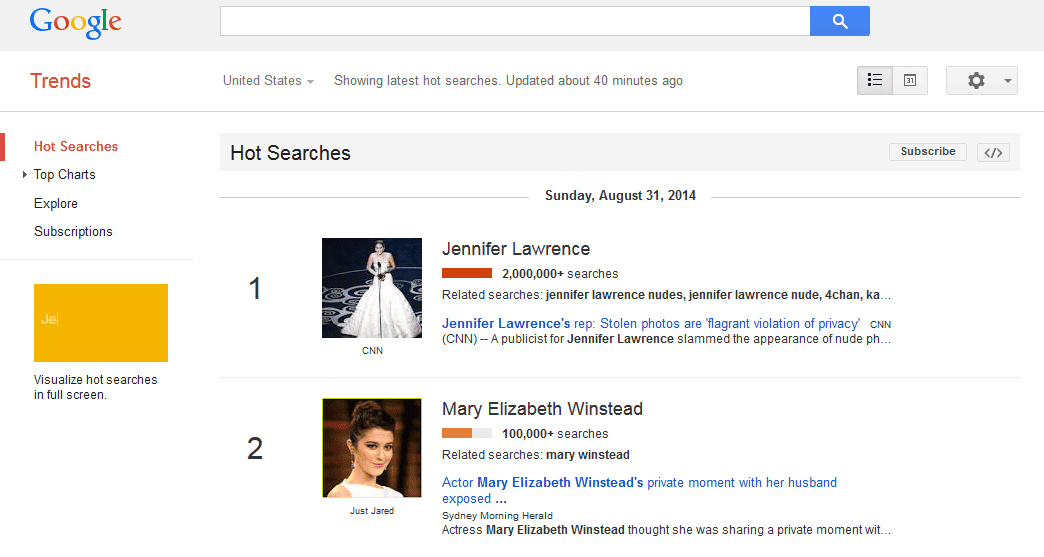 Actress Ariana Grande’s representatives told Buzzfeed “the photos are completely fake” and actress Victories Justice stated on her own Twitter account the photos were indeed fake. Yvonne Strahovski has also been added to the list of fakes, as the Reddit and 4Chan communities decided.

Throughout the day a wrath of legal threats have hit the internet regarding the photos. A representative for Jennifer Lawrence said: “This is a flagrant violation of privacy. The authorities have been contacted and will prosecute anyone who posts the stolen photos of Jennifer Lawrence.” One redditor made a comment stating “What, are you gonna subpoena the entire Internet?”

What will come for the leaked nude photos of the celebrities or hacker/s remains unknown.