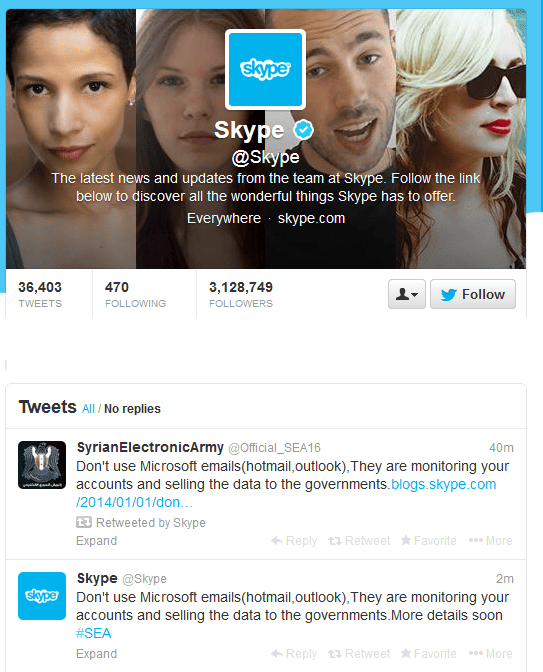 They posted this vital message on Skypes official Twitter, official Facebook, and official blog. The Syrian Electronic Army is infamous for hacking bigger corporations networks, and/or redirecting the corporations domain to their personal domain. They show corporations that they are not invincible to attacks, and want others to know the same. While Skypes data logging servers/nodes were not hacked, the Syrian Electronic Army still left an important message. While Skype is owned by Microsoft, and Microsoft supports a censored internet, its known that they spy on users. They log all Skype chats, emails, calls, and everything else done on their networks. While this may go under the radar, this is a huge invasion to privacy. Whether the Syrian Electronic Army hacked Skype for political reasons, or other reasons, they still left a very important message. For a safe alternative to Skype, you can check out Silent Circle, a peer to peer version of Skype. No logs, encrypted communications, and completely off the record. Its so secure that its P2P base means only you and that user connect to each other. No more servers, or anything else, just your peer, and yourself. The Syrian Electronic Army left an important and very true message on the official Skype networks.