The picture is cut off, but the full message stated

You imbecils will attack our country with fake phishing emails and we’ll accept your lies and dont do anything ? That is the end you deserve:

“And never think that Allah is unaware of what the wrongdoers do. He only delays them for a Day when eyes will stare [in horror].”
Ibráhím – 42
For only conscientious people ! http://www.youtube.com/watch?v=c0hOYa6Q0a0 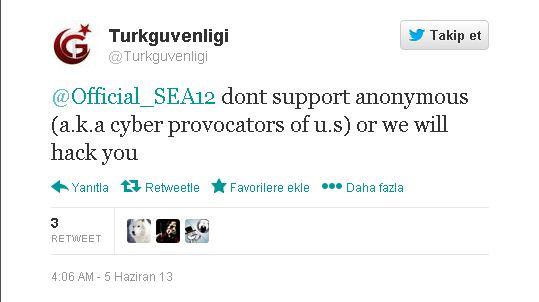 Fear not the elite phishing crew has been brought down to where it belongs, the hacking scene will never accept social media savvy and attention seeking so called “hackers”. It was always a underground realm and the real can distinguish the real in this game. We sit back hand asses while these lowly kids make twitter accounts and do phishing to outdated professionals in the COMP-SEC field. The show is over and this is just a mere example of Underground vs self-proclaimed-l337-hackers. We don’t need to make achievement videos , put high-profile professionals info on the internet, or deface targets that are strictly aimed for media attention. For those that know us have a clear understanding of our achievements and what we can accomplish. And believe me you are just an average joe on my block ;)

End of the game for dogs of the murderer “asad”. In support of russia, you worked hard to make people believe in that you are right to make muslim massacre in syria. And we warned you before, as you see below ;)

*The deface mirror can be found at Zone-H here.