After being quite for a few months, the pro-Assad hacker group known as the Syrian Electronic Army hacked five of the largest hosting companies in the world, run by the Endurance International Group Inc, including Bluehost, Hostgator, Justhost, Fastdomain and Hostmonster. 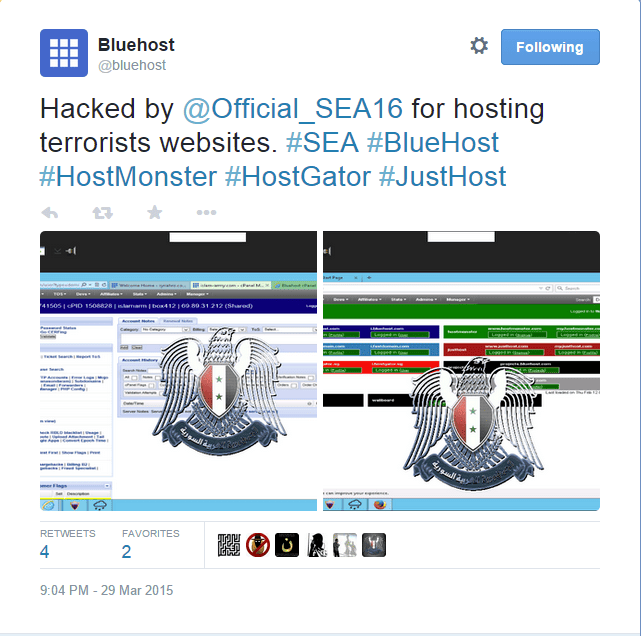 The Syrian Electronic Army revealed their motive behind the attack, stating the Endurance International Group was hosting terrorist websites on their servers with no repercussions. The Syrian hackers have been upfront about attacking the IS and websites affiliated with it. Accompanied by the amass of domains hacked, they also hacked the website of the Islam Army. Ironically enough, the website was being hosted by the Bluehost company.

Shortly after Bluehost, Hostgator, Justhost, Fastdomain and Hostmonser had their domains hacked, the SEA threatened that next time they will change the hosting providers DNS settings.

Next time… we will change the DNS. #SEA cc @Bluehost pic.twitter.com/Dd9lgOloNB

A spokesperson for the Syrian Electronic Army told tech blogs they gained initial access to the local-control panels of each hosting company after the hackers had established 2 VPN connections to the Endurance and Bluehost local networks.

The Syrian Electronic Army is the same group of hackers that are famous for their advanced phishing attacks that have landed them access to the official Twitter account for Xbox Support, Microsoft News, Skype, the official Forbes domain, and hundreds of other big name sites.