The loosely based hacking group Anonymous is breaking headlines nearly everyday for their latest operations to uncover tyranny, corrupt governments and expose the wrongdoing going on around the world. Even though the hackers are standing up to billion dollar corporations and corrupt governments, they haven’t stopped there, and have done numerous operations for the ones who don’t have voices, animals! That’s right, the online collective has done a number on companies, corporations, organizations and even governments who have harmed or put animals in harms way.

To fight the evil abuse directed towards animals, Anonymous hackers have setup several operations which target helping animals. These operations are generally run under a certain hashtag, and on dedicated days of the week, the hackers will go rampant attacking these evil organizations abusing animals at will. From there, the hackers will generally stick to the hashtag and continue to target and attack companies, releasing all their data via Twitter as well as sending massive Distributed Denial of Service (DDoS) attacks. DDoS attacks are when attackers send a massive amount of faulty traffic to a webserver in hopes of overwhelming the server and knocking it offline. These attacks are generally very effective for Anonymous when wiping evil organizations across the Internet.

*Note: We acknowledge Anonymous is a loosely based hacking collective with no leader or dedicated spokesperson, however we reached out to many Anonymous members apart of these operations to get their comments. Please note these members do not speak for the entirety of the Anonymous collective, nor does anyone. Lastly, we have decided not to link out to any of the hashtags directly as they contain extremely graphic pictures of animal abuse, however feel free to view them at your own will. Operation Beast is one of the collectives most popular operations targeting animal abuse, and more specifically bestiality. Anonymous has specified that they are targeting countries where bestiality remains legal, which includes Brazil, Cambodia, Finland, Mexico, Romania, Thailand, and 12 states within the US.

Operation Beast was formed around March of 2013, originally running under the tag OpNullDemark, but changed to OpBeast on April 21st, the day Denmark officially ban bestiality country-wide.

Hackers in many of these operations have expressed their disbelief that this type of abuse is still relevant let alone legal in a number of countries. Shockingly, some countries actually reformed bestiality laws after being viciously attacked by Anonymous for their support in these types of abuse, though they never reveal Anonymous caught there eye.

Attacks conducted under Operation Beast are 24/7/365. If you check under the hashtag on Twitter or Facebook, you will see a rolling feed of Anonymous hackers doing work day and night, attacking to many for us to report!

Speaking with several hackers related to attacks in support of #OpBeast have told us they not only to wish eradicate bestiality from the world but bring awareness to those who suffer from bestiality tendencies, as they consider it is a disease. One member heavily expressed that they wish those who suffer can get proper treatment without judgement or public harassment.

Another Anonymous member told us everyone can contribute and be an active member of Operation Beast, all it takes is tweeting legislators, reporting bestiality sites online as well as reporting pro-bestiality accounts on Facebook, Twitter, Tumblr, etc. All it takes is a little help from everyone and hackers can fuel a change that will legally put an end to at least one form of animal abuse worldwide.

Another pro-animal rights operations is operation fun kill, targeting those who hunt for fun. These types of hunting include trophy hunting, dog smuggling, animal testing, whaling, shark and dolphin fishing, as well as abuse against animal-rights including the destruction of habitats, inhumane slaughter houses, dog fighting, bull fighting, and the trade of ivory, rhino horn, exotic animals and fur clothing.

The reason? Corporations are literally destroying animals habitats for money. Not only are they killing the fabric of nature but they are literally annihilating it, wiping down forests, testing toxic products on animals, and literally fishing the ocean dry.

Trophy Hunting has gone extremely far and there have been dozens of accounts of pure animal murder, even including the hunting of the beautiful Cecil the Lion!

Notable hacks: When the operation spawned hacks went wild, however they have recently subsided. The group has carried out a number of attacks in the name to stop animal hunting, one of the most notable being when Anonymous attacked the website and members of a private auction for the rights to kill an endangered animal. A man paid an organization $350,000 for the rights to hunt a black rhino, a species whose number continues to dwindle as barely 5,000 are reported alive today.

Shortly after his purchase, the man had his name leaked, and well, Anonymous bent them over their knee and have him a hard virtual spanking. Mere hours after his name was leaked the collective had already doxed him alongside gathered several other members information. Throughout several days and messages the man received relentless death threats and harsh comments, leading to him actually contacting authorities, where the FBI allegedly showed up to investigate.

Amid the outcry caused by Anonymous, the hunter ALLEGEDLY put his $350,000 back into helping saving the almost extinct black rhino species. Operation Whales is a newer operation Anonymous has spawned, targeting countries, governments and organizations who actively hunt dolphins and whales.

The group widely criticizes Iceland and Japan for their relentless whale and dolphin hunting, calling for it to be named illegal as well as stop the hunting entirely. Iceland has been hunting whales for years, disregarding not only the International Whaling Commission but the fact that the oceans are drying up.

Whales are endangered in Iceland, yet the country continues to carelessly slaughter thousands of innocent and endangered whales living in their natural habitat, the ocean!

Notable hacks: Operation Whales has tens of thousands of active supporters for a number of reasons, a large one actually being #4 on the list, but the group has conducted dozens of hacks in the name of Op Whales.

One of the most notable was the recent attack that plagued Nissan Japan. An Anonymous hacker with ties to OpWhales defaced the car maker Nissan’s Japanese domain, calling on Japan to stop killing whales and dolphins. Days later the group knocked off a Japanese Airport website, once again in protest dolphin killing.

These are just two of the hundreds of hacks Anonymous conducts for OpWhales nearly daily!

Going hand in hand with Op Whales is Operation SeaWorld, an operation that solely targets SeaWorld. The group has time and time again proved that SeaWorld, the waterpark, stores their whales in captivity and continues to mercilessly abuse them. Shortly after Blackfish was released, a film trying to expose SeaWorld’s wrongdoing, Anonymous took matters into their own hands, birthing Operation SeaWorld.

According to Anonymous, SeaWorld has committed a catalog of crimes including kidnapping Orca whales, murdering Orca whales, funding Taiji dolphin trade, funding dolphin slaughter for sushi, lying to trainers about safety, lying to customers, admitting to stealing baby penguins, drugging Orca’s including pregnant ones with anesthetic, drilling into Orcas teeth with no anesthetic and spending less than 1% on rescue and rehabilitation.

However, somehow the scum at SeaWorld continue to operate their whale jail with zero consequences. SeaWorld is slowly growing into one of the world’s most hated companies, hell even good ol’ country singer Willie Nelson has a serious distaste for Seaworld. 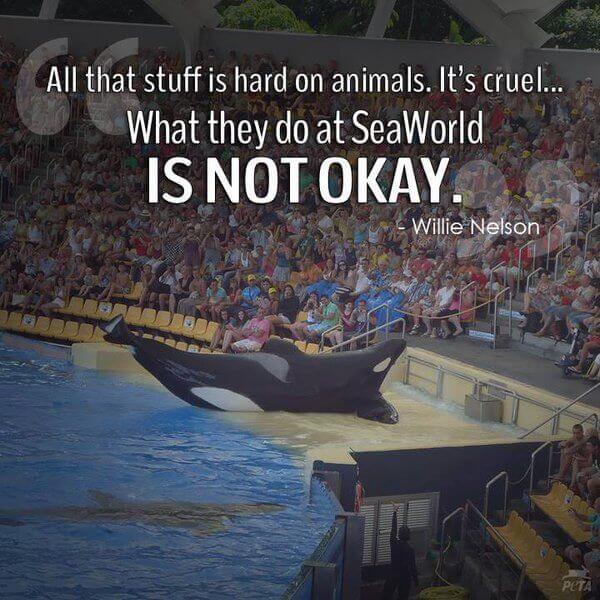 Seriously, the company is so hated they even had their own employees infiltrate anti-SeaWorld groups, presumably to get inside information on their planned operations.

Anonymous commits operations in groups, meaning there have presumably been thousands of attacks against organizations in the name of OpSeaworld, however they are rarely all grouped together.

It’s safe to say you should avoid supporting SeaWorld at any cost, even if its their water prison they call a park, or buy any of their merchandise. Just avoid SeaWorld, they are disgusting.

Anonymous has come together with other hackers to aid the Swedish wolf population, which stood at an estimated 250 in January 2015. What’s shocking is though Swedish wolves are quickly going extinct, the Swedish government actually signs court documents, allowing for the endangered species to be legally hunted.

This has caused outcry for the helpless community of Swedish wolves going extinct, one of the main reasons the operation was started in the first place.

Notable hacks: Due to Save Swedish Wolves being a much smaller operation, we are unable to pinpoint any notable attacks. While searching through the Internet we saw dozens of Anonymous members launching massive DDoS attacks against websites in protest of the wolf killings. So to put it shortly, we are seeing a lot of DDoS attacks and website defacement on a consistent basis.

Regardless of your stance on Anonymous or cyberattacks, it’s safe to say Anonymous is doing this for the world. Anonymous is standing up for those who don’t even have a voice. Anonymous is trying to protect the wildlife for generations of children ahead of us. These operations are no joke or small matter, wildlife is being wiped out a strikingly fast pace. Anonymous does not care if it is a government or small organization harming animals, no target is to big for them.

The countless attacks Anonymous has launched have caused tens of thousands to wake up around the world, and is only rapidly gaining more and more supporters everyday! Who doesn’t love animals (aside from the Japanese government)?

And if you think these are minor attacks that will be forgotten about tomorrow, just remember, Anonymous warns those target of attacks that they are “not a threat” but instead “a promise!”