Hundreds of Israeli websites and organizations came under fire Monday night, as the hacker collective Anonymous, launched their planned Electronic Holocaust against the Israeli government, which has been dubbed #OpIsrael.

The hacktivist collective, who are known as Anonymous, threatened the Israeli government with an Electronic Holocaust last month, stating the collective would essentially make a mockery of their security and digital communications. Anonymous threatened they would take government websites offline, military websites offline, and essentially wipe Israel from the cyberspace of the internet.

“As we did many times, we’ll take down your servers, government websites, Israeli military websites, banks and public institutions. We’ll erase you from cyber space as we have every year, 7 April 2015, will be an electronic holocaust,” the collective said in their video threatening their planned electronic holocaust.

The collective has come through on their promises, taking down several hundred Israeli-based sites, services and organizations. The list of hacked sites ongoing, but the range of sites hacked is large.

Attacking several government websites, educational websites, public institution and just about any Israeli-based site the collective could hack. The massive list is ongoing, and the #AnonGhost team continues to hack and attack several hundred sites (AnonGhost is not affiliated with the Anonymous collective). The following deface page was left on all of the hacked websites. 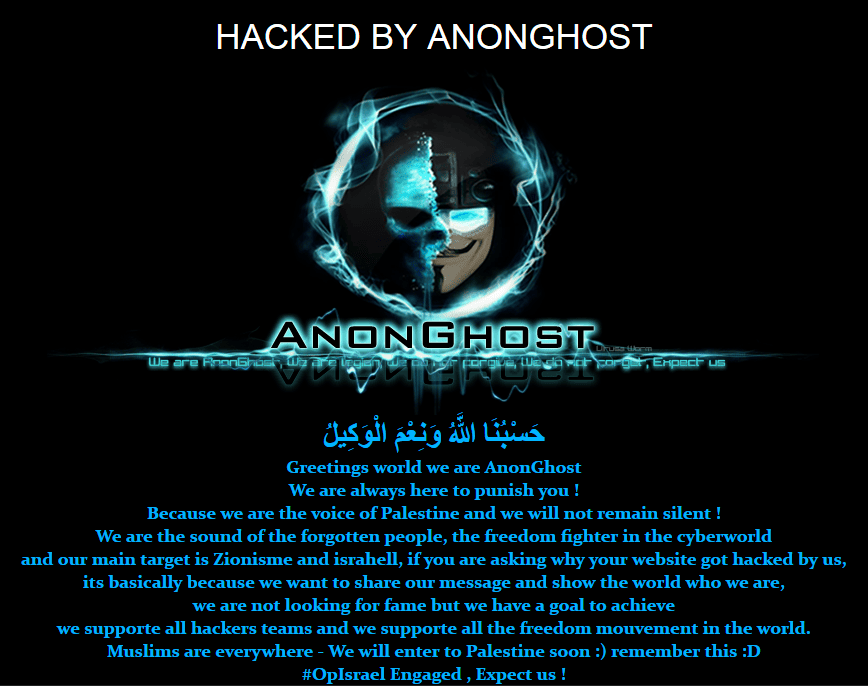 The attackers appear to be gaining access through a WordPress exploit on several sites, one site owner who was attacked reported. Stating he was using possibly outdated software when the attack occurred.

The method of entry isn’t known yet, but that hasn’t hindered the Anonymous #OpIsrael operation from continuing on.

The attacks are not only website defacement’s, several Israeli government websites have been taken offline with a Distributed Denial of Service (DDoS) attack. A method that hackers use to turn websites offline by essentially overloading the server with faulty traffic, causing it to fail and turn offline.

Not only has AnonGhost been hacking amass of websites, the team is also hacking into Israeli radios, posting photos of the system administrator panel for several radio stations. Alongside hijacking websites and radios, the collective also leaked thousands of email addresses, Facebook credentials alongside Israeli peoples’ credit card data, including nearly all the details of the card owners.

Some hackers are even posting live-video feeds, claiming CCTV has been hacked, linking to the video feeds on several social media platforms.

While the swath of attacks has only begun this April 7th, we will continue to keep you updated on #OpIsrael.

Note: For those keeping up to date on social media feeds under the tags #OpIsrael, #Opisrael2015, #AnonGhost, #Anonymous and possible others, be careful clicking links. We have found a number of links to be directed towards spam and malicious installs unrelated to ongoing Anonymous attacks.