Anonymous hackers have kicked off December targeted YouTube celebrity Sam Pepper in response to his most recent prank video, which illustrates the YouTuber kidnapping two of his friends and murdering one while the bestfriend has to watch.

Coming to Twitter late Monday night, Sam Pepper, the controversial yet popular YouTuber with over two million subscribers gained the attention of Anonymous hackers in an unprecedented turn of events.

Just one day after Pepper uploaded his most recent prank video titled, “Killing best friend prank,” Anonymous quickly responded, calling Sam Pepper’s recent actions “sick” and “disturbing,” while demanding the YouTuber delete his most recent work, giving him 24 hours to meet their request or “incur the wrath of Anonymous.” 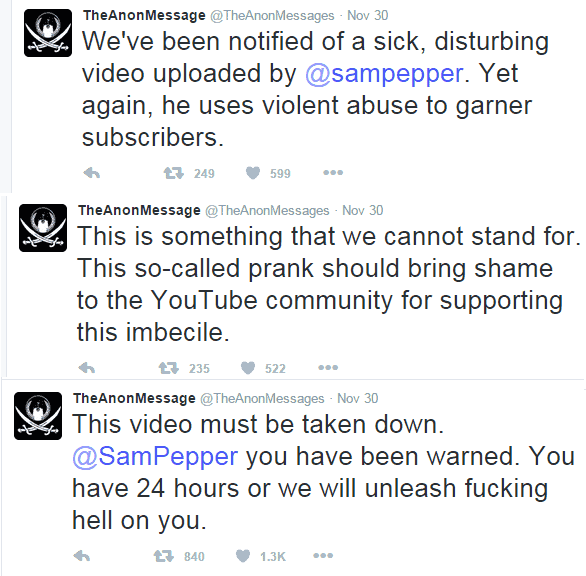 BULLETIN: Sam Pepper has exactly 24 hours to take down the video titled "KILLING BEST FRIEND PRANK" or he will incur the wrath of Anonymous.

Following the demand, Anonymous members instantly began sending an endless variation of tweets towards Sam Pepper with the hashtag #EndSamPepper.

During those 24 hours thousands directed their tweets towards Sam, demanding that he remove the video and publicly apologize. The long list of tweets directed towards Sam included countless death threats, name calling, cryptic messages and ultimately asking YouTube to ban the video alongside Sam Peppers account. Not anything Sam isn’t used to, but more on that later.

After nearly 24 hours of relentless tweets towards Sam, which he never paid any attention to, Anonymous began their planned operations.

However of the collected data, the alleged IP address the hackers claimed to have captured links back to a VPS hosted in the UK, where Sam used to live, though he now resides in California in the United States. The authenticity of the other published information could not be verified.

Following the tirade of personal information being leaked, Anonymous has been met with a large dose of criticism, with some tweeting that the most recent operation against Sam is a joke while thousands follow closely behind Anonymous and continue to support #EndSamPepper.

For those of you that don’t know, Sam Pepper is an extremely popular YouTuber, and even a star outside of the screen. Just a year ago this September, a number of rumors came out surrounding Sam Pepper allegedly raping several teens. The story, which instantly went viral, went on to say that Sam used his celebrity status to lure teenage girls back to his house where he allegedly raped them.

The explosive news lead to Sam Pepper loosing hundreds of connections, being booted off TV shows, canceled interviews and even led to him being dropped by his partner network. However, nearly a year later, the accusations haven’t amounted to much, and Sam has had all charges against him dropped as there wasn’t enough evidence to arrest him.

Though the Anonymous account who started the recent tirade likely hoped it would result in Sam Pepper deleting the video, its only driven more attention to it. In the past 48 hours the video has gained nearly 4 million views, millions more than his average videos months old pull in.

Sam’s friends have tweeted out that they all collaborated on the final video and that the prank has actually brought them closer together. At the end of the day Sam Pepper has dealt with criticism far worse than this, meaning we will have to watch the Sam Pepper and Anonymous story unfold.

And if you want to check out the prank video that caused all this commotion, here it is: