Anonymous hackers have revamped a past operation pointed towards ending animal abuse, operating under tag #OpNullDenmark and #OpBEAST. The operation aims to raise awareness about animal-cruelty and sites promoting animal abuse/bestiality (sexual relations between an animal and person).

The operation is extremely active on Twitter, but a number of Anonymous hackers have taken matters into their own hands, launching Distributed Denial of Service (DDoS) Attacks on the animal-abuse websites, taking them offline as well as defacing several domains.

Of the defaced domains, hackers left a message with their intended motive behind the attack, stating: 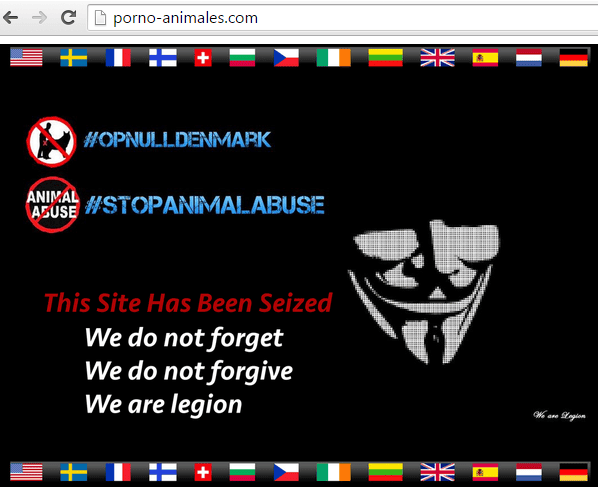 An active social media account for the Anonymous operations, #OpNullDenmark and #OpBEAST, tweeted a link to a list of hacked and removed websites.

The Anonymous hacking group has vowed to continue targeting animal abuse and animal sex sites, while also targeting the hosts and countries that allow the activity to continue legally.

The domains that have been hacked and removed have in fact been removed from the web. The domains no longer resolve, and their DNS it set to domain sale sites. The websites have been wiped clean, with either the Anonymous deface page or the domain listed for sale.

The domains appear to be in transfer, where the domain registry will either choose to sell them or turn the domain offline.

The operation is in full effect, running under hashtag, #OpNullDenmark, #OpBEAST, and #OpFunKill. The operation is ongoing and active Anonymous hackers are keeping the list of sites updated and continuing to rid the Internet of animal sex abuse sites across the web.

Update: A commenter has informed FreedomHacker that one of the domains was defaced via the site owner. The hackers had threatened the owner and the manager went ahead and uploaded the deface image himself. Though multiple domains have been hacked, this is likely not the case for every deface.