Wikileaks, the organization who publishes government secrets for the public to see has just now, released the trove of data stolen in last year’s Sony Hack. According to the press release on Wikileaks, the Sony hack archive contains 30,287 documents and 173,132 emails from Sony Pictures Entertainment. Included in the searchable Sony email archive are the more than 2,000 recipients who sent and received the emails.

“This archive shows the inner workings of an influential multinational corporation,” Wikileaks editor-in-chief, Julian Assange said. “It is newsworthy and at the centre of a geo-political conflict. It belongs in the public domain. WikiLeaks will ensure it stays there.”

Last year, November 24th, Sony Pictures Entertainment suffered one of the world’s most devastating cyberattacks overnight. A group of hackers calling themselves, Guardians of Peace (#GOP), took over Sony Pictures entire network, downloading every file from their servers just before erasing it.

After the overnight attack, Sony Pictures employees’ awoke to the entire office offline, with the following message being displayed across every single computer on the Sony network. 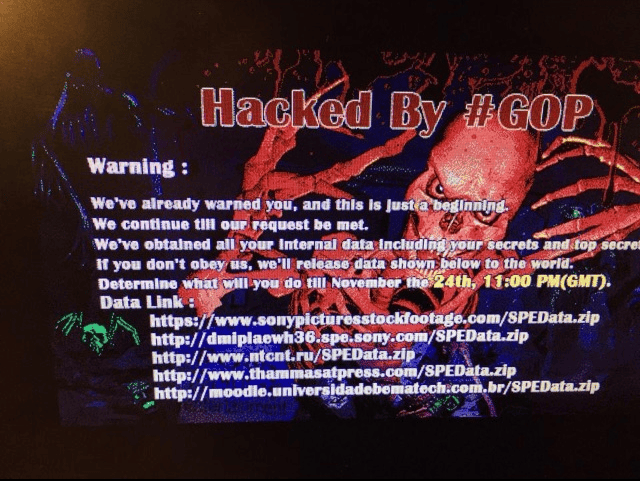 The exact malware the Guardians of Peace used to wreck Sony’s corporate network was found available on underground hacking forums for a whopping $30,000 worth of Bitcoin.

Following the attack, the Sony hackers began the leak the confidential data to journalists and throughout a number of public file sharing sites. Almost instantly, the U.S. government pointed fingers at North Korea, blaming the entire attack on country’s government with almost zero proof. There was so much controversy over the hack, federal authorities had to call on President Obama to issue a statement against the matter.

The Sony hack was blamed on North Korea because during the attack, Seth Rogan’s ‘The Interview,’ a film in which Rogan and his co-star are asked to assassinate North Korean dictator, Kim Jong-Un, and was set to hit theaters in only a few weeks. The hackers themselves even demanded The Interview be pulled, calling it a “terrorist film!”

Wikileaks has since made the entire Sony hack archive publicly available, noting the information belongs to the people, not secret multinational corporations. The official Wikileaks press release states:

“SPE is a US subsidiary of the Japanese multinational technology and media corporation Sony, handling their film and TV production and distribution operations. It is a multi-billion dollar US business running many popular networks, TV shows and film franchises.”

“In November 2014 the White House alleged that North Korea’s intelligence services had obtained and distributed a version of the archive in revenge for SPE’s pending release of The Interview, a film depicting a future overthrow of the North Korean government and the assassination of its leader, Kim Jong-un. Whilst some stories came out at the time, the original archives, which were not searchable, were removed before the public and journalists were able to do more than scratch the surface.”

Sony had gone as far as to threaten companies exposing the confidential emails, and published information found in the confidential Sony archives. Throughout their endless threats, nothing happened, Sony had no right to remove such information and the info still remains online today.

Publishing the full Sony hack archive was a huge risk, but Wikileaks is no stranger to risk, lawsuits and countless court filings. The organization’s tagline is: “We open governments.”

Wikileaks, being the political activists and freedom fighters they are, even detailed Sony’s dealing with the MPPA and internal reactions to the Trans-Pacific Partnership (TPP). They even detail piracy dealings and official documentation regarding piracy actions.