The official United States Army website, www.army.mil, was offline for several hours today after pro-Syrian hackers attacked the site, defacing the homepage. Syrian hackers defaced the page with a pop-up message that read, “Your commanders admit they are training the people they have sent you to die fighting,” to anyone who visited the domain.

“We take security concerns extremely seriously and, in an abundance of caution, we are conducting a full investigation. At this point we have no reason to believe any customer data has been compromised,” a Limelight spokesperson told Ars speaking on the recent breach.

At the time of writing this article, the official U.S. Army website has been restored and is functioning, though, just a few hours ago the site was down for maintenance.

“Today an element of the Army.mil service provider’s content was compromised. After this came to our attention, the Army took appropriate preventive measures to ensure there was no breach of Army data by taking down the website temporarily,” Army Brig. Gen. Malcolm B. Frost told CBS.

Syrian Electronic Army hackers appear to have only affected the Army website as other Army affiliated sites were not affected. However, the website for the U.S. Strategic Command-the joint Department of Defense command overseeing space and nuclear forces-is also down, as well as the official website for the U.S. Cyber Command who hosts their own domain, though it does not appear to be affiliated with the U.S. Army. 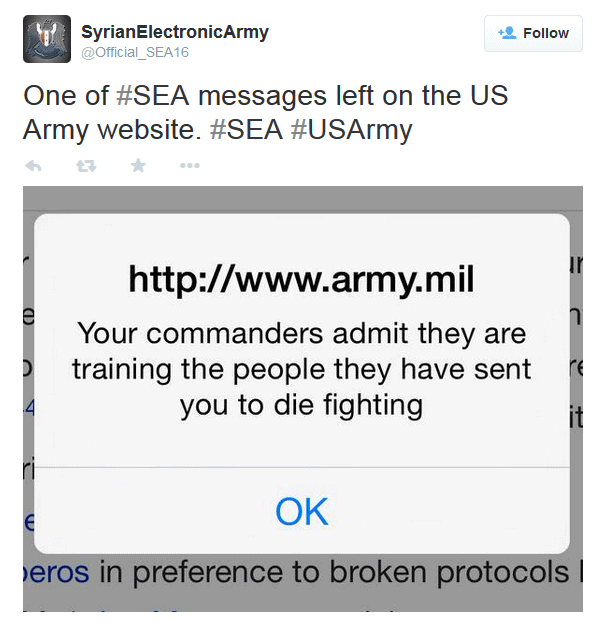 Syrian Electronic Army is no stranger to hacking high-profile sites, in the past years the hackers have hijacked massive sites including Microsoft, Skype, Forbes, the Washington Post, eBay, PayPal and the group even hacked the five largest hosting companies in the world.

Alongside hijacking hundreds of Twitter accounts belonging to Western media outlets. The SEA has even created their own distribution of Linux that their supporters can install and use.

Syrian hackers have not said what their motive behind the attack was, but messages appearing on the hacked U.S. Army website made it clear.