Syrian hackers apart of the pro-Assad regime have outdone themselves once again, defacing one of the worlds largest news media platforms, the Washington Post, redirected visitors to a barrage of different messages stating the Post was hacked.

In an attack against the Washington Post, Syrian Electronic Army hackers hijacked the major news domain Thursday, causing parts of the Post to go down for emergency maintenance. Parts of the Washington Post that were hacked redirected visitors to a barrage of different messages, some even being redirected to a website controlled by the hackers supporting Syrian President Bashar al-Assad. News of the hack came from the official Syrian hackers twitter account, writing:

The hackers redirected mobile users to an html page that read, “Hacked by the SEA!” while two separate notifications popped-up on screen reading: “The media is always lying”, and “Saudi Arabia and its allies are killing hundreds of Yemens people everyday!” 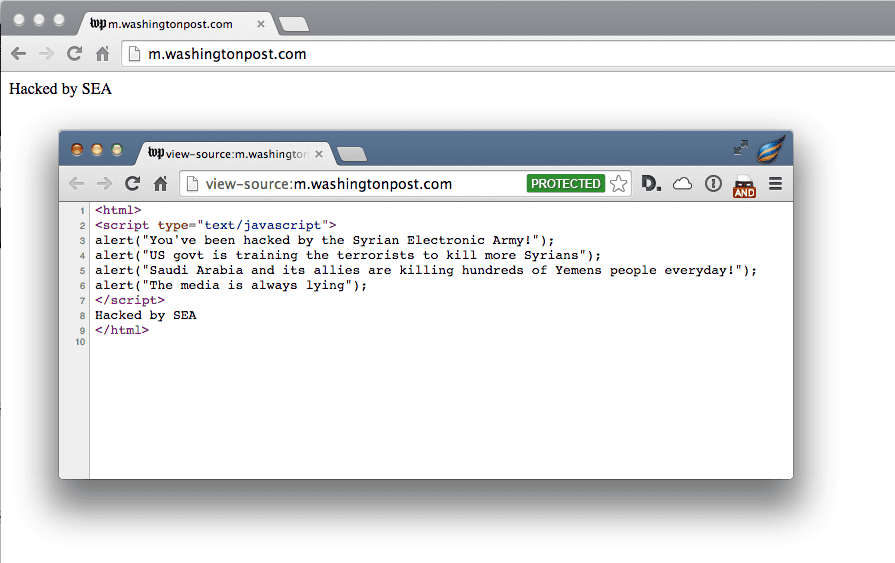 Syrian Electronic Army hackers were able to break into the Washington Post’s website through their content deliver network, InstartLogic, and had the CDN send out various messages stating the Washington Post had been hacked. Many visitors reported seeing different messages while other were redirected to the official website the SEA operates.

Shailesh Prakash, the Washington Post chief information officer said the SEA attack only affected the Post’s mobile homepage and “some section fronts on the mobile site,” but assured visitors the hack did not extent to article pages. “The situation has been resolved and no customer information was impacted,” Prakash said in his public statement Thursday.

Syrian hackers said their motive for hacking and defacing the Washington Post and other Western media outlets is for spreading misinformation about the Syrian President Bashar al-Assad’s regime in Syria.

This is not the first time SEA has hacked major traffic websites, the Syrian Electronic Army has hijacked hundreds of website including Microsoft blog, Skype, PayPal, eBay, Forbes and most recently, they hacked into the world’s five largest webhosting companies.

In past hacks the Syrian Electronic Army has hijacked high-profile websites through several means, their most popular being spear phishing attacks.

Information regarding the Washington Post hack is limited, we will keep you updated!