After taking the Xbox live network offline just two weeks ago, the infamous Lizard Squad hacking gang is back in town, striking back by hacking and taking control of the luxury smart car manufacturer Tesla’s website and Twitter account. The hackers also hijacked the Twitter account of Elon Musk, the founder and CEO of Tesla and SpaceX, an aerospace manufacturer.

Tesla, the automaker who makes one of the smartest, technology connected cars on the market today fell prey to hackers Saturday, having their official Twitter account hijacked by the Lizard Squad at around 5 PM EST last night. To signify the account was stolen, the hackers posted a tweet with a phone number, stating whoever called the number would get a free Tesla.

The hackers then continued to change the accounts display name as #RIPPRGANG, keeping the @teslamotors username meaning the account appeared verified during the time of the tweets. 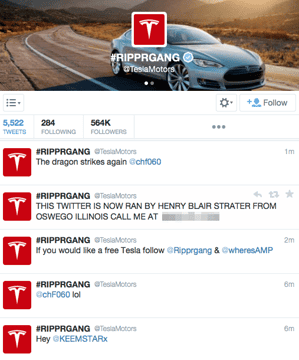 While the Tesla Motors twitter account was hacked, the squad had posted tweets claiming anther twitter user named @rootworx, was responsible for the attack. The hackers then posted rootworx phone number on the official Tesla Motors Twitter account, writing something along the lines of ‘call this number for a free Tesla.’

The number hackers posted belonged to the Twitter handle, where rootworx claims he did not take part in the attack against Tesla and that his phone number was receiving several calls every minute asking for a free Tesla.

Lizard Squad also managed to hijack and deface the www.teslamotors.com domain, redirecting users to a deface page. The domain appeared to be hijacked through a DNS redirect attack.

The deface page the squad left appeared with a bright orange collage of photos and YouTube video. During the time Telsa motors domain was defaced and their Twitter was hijacked, the attackers didn’t stop there, they continued on to hack the Telsa motors CEO, Elon Musk. Musk is a billionaire entrepreneur known for being the CEO and founder of both Tesla motors and SpaceX. 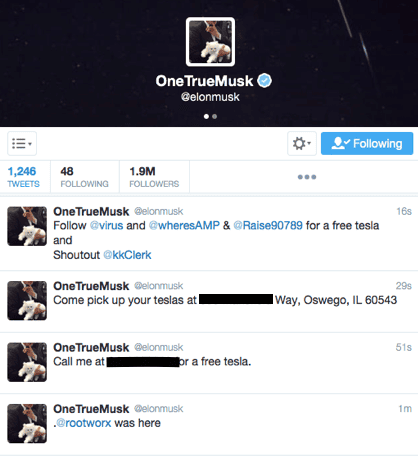