Where is Assange? The unfortunate headline we thought we’d be able to put to rest by this week, however, the Wikileaks saga continues. Two weeks ago we were questioning if the Wikileaks foundation had been compromised, then just last week Wikileaks informed supporters they literally cannot prove Julian Assange is alive. Now, Assange, the founder of Wikileaks, who appears to have vanished mid-October, hasn’t been seen alive or heard from since October 4th. Even after recent “interviews with Assange,” a large portion of supporters are still asking the question, where is Assange?

Assange Does “Live” Interview Over the Phone

Last week we thought this “is Julian Assage alive” notion would easily be put to rest, as we heard there was a future interview scheduled with him. Many speculated the interview would be audio-only, doubting the legitimacy before it even began.

And what do you know, the recent interview turns out to be pre-recorded and audio-only, but that’s not it, it gets worse. Apparently, Assange had a cold, which makes up for why his voice may be a little “different” throughout the call. Now I mean this is all plausible to an extent, but the timing of everything is just a little too coincidental. According to our friends over at /r/WhereisAssange on Reddit, the ones who pointed us onto this whole manhunt in the first place, also have questions about the audio.

Some users are even discussing getting this audio analyzed by a professional, who could compare past and recent interviews and even going as far as to analyze the accent. Many users also brought up Assange’s accent, noting that it appeared a little different. If he is somehow alive, this very well could be a common cold paired with poor call quality. Or, it could be an actor, emulation tool (yes they exist), or even pre-recorded audio. There are more than enough clues in those links to suggest something is happening. The list of “what could” goes far beyond Assange having some snot up his nose.

The Wikileaks twitter has been continually degrading over time. This was brought up in our earlier article, how the Wikileaks Twitter made a smooth transition from being a non-bias source, to now sharing and even tweeting extremely bias articles. Most surround US politics and the recent election, and what’s really damning is this is an action Julian Assange made clear 10 years ago, Wikileaks will always remain unbias.

Last week, the Wikileaks task force blatantly came out telling people “it is not possible” to prove Assange is alive, while Wikileaks chimed in adding there are active assassination threats against him. Apparently, one of the reasons he cannot show he is alive by walking to the embassy window. Well yes Wikileaks, there have and always will be active threats against Assange and everyone knows that.

Now Wikileaks itself has gotten so fed-up with people asking for proof of life from Assange they’ve gone as far as to blatantly ask their followers to stop asking.

Please stop asking us for "proof of life". We do not control Assange's physical environment or internet connection. @MashiRafael does.

On a similar note, there have even been instances of users pointing out the Wikileaks Twitter appears to be becoming less tech literate, with the way they are wording and talking about information. However, these have recently been debunked as Wikileaks has a track record of doing this type of thing. Here is some concrete evidence we can link to, now Wikileaks, do the same with Assange. Prove it!

Recent Leaks Are Not New

Just yesterday Wikileaks released even more political cables, however, the information is not new. What does this mean? Simply put, the information Wikileaks published online could be found months ago through official .gov domains. There are even backups on Archive.org of the files, showing these are unclassified and public knowledge. At least from the depths we personally have and have seen investigated.

Riseup, Assange’s Email Provider, May be Compromised (Not Likely)

Now we added not likely as there have been some recent events that could point us away from the thought of Riseup being compromised. But first, let’s start with who Riseup is.

Riseup is a free and privacy-conscious email provider run by a collective of activists, hacktivists and great minds alike. The owners have made it clear they will shut the service down before they will every comply with a law-enforcement request. Following in the footsteps of the once-great Lavabit, the ones who unknowingly hosted Edward Snowdens emails and shut down before disclosing user data to the feds.

Riseup has a canary which allows the public to know if the company is safe or has presumably been served a law enforcement request and are being forced to spy on users. Now Riseup updates their canary every quarter, and it’s not unusual for it to be late. However, Risup’s canary, which should have been due November 16, 2016, is beyond that point. They haven’t updated the page since August, and it only gets more suspect everyday.

Even more bizarre, their Twitter has, what we would call, several cryptic tweets. Starting from the beginning.

Dear friends, please remember that internet is not always the answer for communications and it's never the goal. See you in the streets.

While the next tweet is clearly related to Leonard Cohen’s death, it’s just an odd quote to choose at such a time.

After the public began pressing Riseup for a canary update they quickly responded with a fair statement.

we have no plans on pulling the plug https://t.co/7Bm0KrEnKA pic.twitter.com/MvEu6itTX6

Even after countless statements why can Riseup not simply update their canary? Once users began to press them, Riseup replied again, apparently trying to put users to rest with the following tweet? And they accompany their last tweet with this little gem.

4. Our prior tweets did not have any hidden subtext.

Again, it’s plausible for some to easily deny this and for it to not get any media coverage. But why is absolutely everything so perfectly aligned? Why are the dominos appearing to fall behind the scenes and no one is doing a thing about it?

Riseup says one thing but they can’t simply update their canary and sign it with their PGP key? They would rather leave users to rely on a couple of tweets?

There has been a lot of unclear discussion surrounding the state of Wikileaks hashes and what’s actually going on. If you haven’t been following in the past days, Wikileaks released what they called an insurance file on Assange’s life. This file contained all the Hillary and DNC leaks before they even dropped. They were distributed through an encrytpted torrent during the time there was no scratch of evidence that Wikileaks could be compromised.

Smart move, however, things aren’t exactly matching up at this point in time. Now Wikileaks released the hash on the file, with the intention of users being able to verify the data once it dropped. If the pre-leak hashes coincide with leaks then there has clearly been zero tampering. The torrent is just the same as the publicly timed drops.

Well, turns out these hashes aren’t matching any longer. Their previously released hashes no longer match current leaks, and it’s clear. Now this is where things get extremely unclear. Wikileaks has said the hash is for the decrypted files only, and it has been this way from the beginning. Other have pointed out that this is completely false information, and that Wikileaks even has a history of releasing the hashes of the encrypted files.

There has been an extremely unclear discussion regarding this, and while we are no crypto experts, we can’t endorse either claims.

Embassy Cat & Craig Murray Give us Hope Assange is Safe 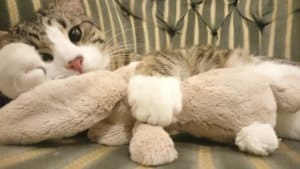 Both embassy cat and Craig Murray have been giving the world immense hope and confidence that Assange is alive. Now what does a cat and Murray have to do with Assange?

Embassy Cat is a twitter account that Assange controls, acting as the famous cat that can been seen near the embassy window many times a day. Now Assange has made it clear in the past that he is the sole controller of the account, which was made clear when the account went dark on October 16th, the day Assange’s internet was cut.

Well, it appears the cat has easier access to the Internet than Assange. The cat’s account has had some weird happenings in the past couple of days. On Thanksgiving day, a picture of the cat appeared with a caption related to Thanksgiving. Now nothing has been on this account since Oct 16th and this suddenly drops? At the same time, Assange doesn’t and presumably never has celebrated the American holiday Thanksgiving.

Now just earlier today Embassy cat posted again, referring Fidel Castro, who recently died. Could it be a message from Assange letting us know he’s safe? What’s a little weird though it the recent photos of the cat attached to the tweet appear to be a younger embassy cat. Users have pointed out the paws are smaller and the current embassy cat is a little more aged. Now that is a little weird.

Moving on to Craig Murray, a close friend to Assange recently made a blog post stating he had dinner with Assange on November 25, 2016. Now this post contains no photos or evidence, other than Murray claiming to have had dinner with him. Murray is not known to lie or participate in coverups, but at this point anything is possible.

I don’t say this lightly, as it may sound we are willing to entertain any conspiracy. But after multiple interviews and people saying they have seen him, why can we not prove he is alive? Not only does it cause public outrage, it’s quickly deteriorating Wikileaks credibility. The exact thing third-party actors want to do to Assange and his foundation, but they are literally forcing us to take it this extent.