Update (11/29/2016): Even after interviews Assange still not confirmed alive. Wikileaks continues to claim absoutley nothing is wrong while recent leaks are public knowledge.

And the unfortunate Wikileaks saga continues. Has Wikileaks, the once truthful whistleblowing and government-exposing platform been compromised by a rogue actor? Speculation arose after a number of things went critically wrong with Wikileaks, such as the cryptographic hashes not matching up, emails missing in the leaks and, well the obvious fact that Assange hasn’t been seen alive in over a month. So where is this unfortunate story taking us now? Well nowhere better.

Wikileaks Task Force: “It is Not Possible” to prove Assange is Alive

Well after long silence from the Wikileaks team, or what seems like silence from the organization that wants to be presumed as not compromised, some information has finally made its way to the top. According to the Wikileaks Task Force Twitter, an account that has direct association with Wikileaks, said “it is not possible” to prove Assange is alive.

Many ask for #ProofOfLife for #Assange. Thank you–but it is not possible to give strong meaningful proof (live internet video) presently.

After this tweet went live the task force went further, replying to a large number of Twitter questions, not able to provide any additional insight. They even went on to say signing anything recent with a PGP key would “set a bad precedent,” as it just shows who is in control of the keys.

Part of that is true, but essentially saying that signing anything recent with your PGP key is useless at this time is quite unreal. The task force quickly fell apart after Twitter users dismantled them with questions.

The task force started out as a great idea, but with the way they are handling requests, is the task force Twitter compromised as well? We have no previous task force to base their recent actions off of, so this last part is purely speculative. It still raises the question.

Now if you still aren’t convinced that the Wikileaks Task Force Twitter is associated with Wikileaks just because we said so, well look no need further. Wikileaks went on to go ahead and reply to a few questions asked underneath the task force’s tweet, clearly endorsing the message.

After a user went on pressing the task force as to why Assange couldn’t come near the window, the official Wikileaks organization politely dropped:

.@Nostril3 @WLTaskForce There is an assassination risk. Such appearances are very rare and often done with little warning for a reason.

Now this is an entirely plausible explanation for not being able to come to the window. We know there are and have been very credible assassination calls against him from many powerful people. Why not mention this earlier if it is one of the main reasons he cannot come to the embassy window? It is good to see Wikileaks actually comment on the case even though this isn’t the news any of us want to hear.

There are a lot of conspiracies going around as to if this is a primer for Assange’s, however, we won’t discuss those here. If you want to read others discussing this tweet there are many open threads on Reddit.

There has been a lot of speculation regarding if Assange was in trouble or worse, his dead mans switch (DMS) would activate, meaning the code to the pre-email insurance release would drop and unlock the torrent files. Releasing all of the Clinton info, 100% unsuppressed among other allegedly damaging information. Now why are we talking about this dead mans key?

Shortly after these theories came alive someone purported to be associated with Wikileaks, a man named Kelly Kolisnik, sent out a series of cryptic tweets. I mean what’s not cryptic at this point? Well first, Kolisnik tweeted out a significant quote from George Orwells ‘1984’. Now this is significant as there was a critical error inside recent Wikileaks drops made public October 18th. The files are dated 1984, which just happens to be the name of a book written about an intense surveillance society. 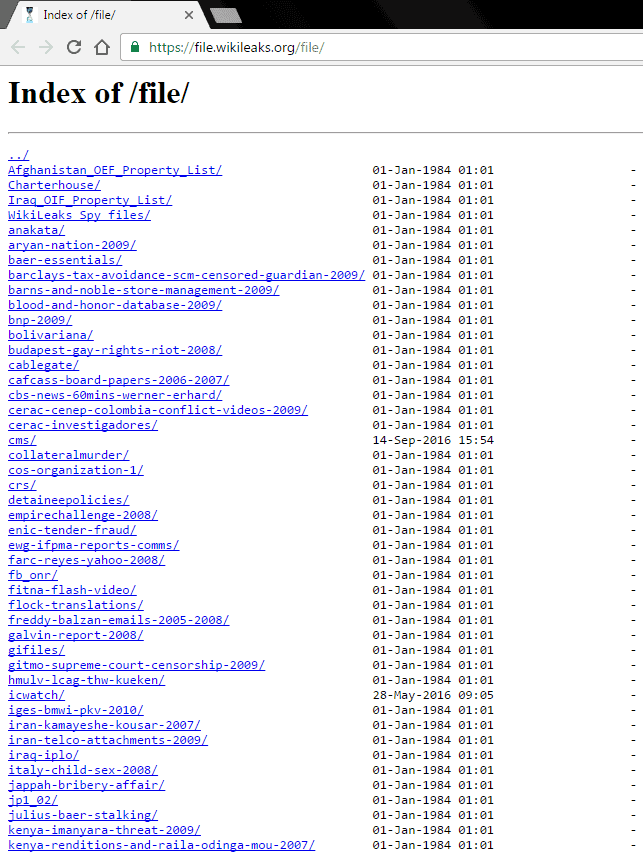 This page has been live for several hours, but has recently been edited with no comment from the Wikileaks staff. What to make of all this is not clear yet and is still being investigated. The comments linked above give great insight on corrupt archives, downloads and what the files contain.

Following the 1984 debacle going live, Kolisnik hops back on Twitter, sending out a random set of numbers and letters people believed could be associated with Assange’s dead man switch. After some investigation, the community was able to identify it was a bitcoin address.

After the community discovered this, almost as if Kolisnik was watching, several random transactions began to occur. An alarming number first appeared, a transaction for 0.0911.

Shortly after several transactions started incoming. Eventually spelling out the message “We are safe, but low on cash. Keep us strong.” 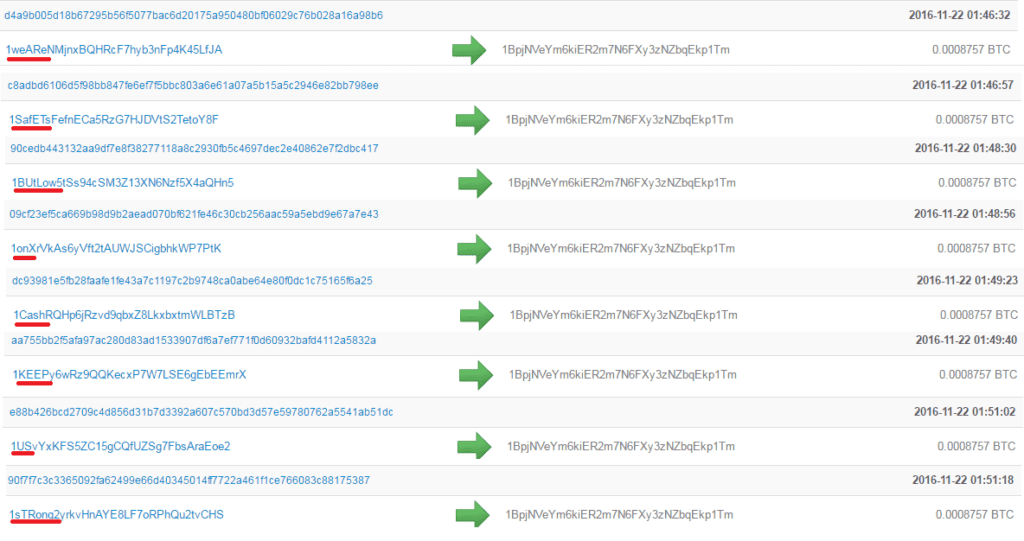 Now after this hit there was a lot of question around who this Kolisnik fellow is. Is he directly connected to Wikileaks or is he just a random troll? Well it turns out he does have ties to Wikileaks, but not strong ones.

For starters, his only association with Wikileaks was helping them with their online store. His official LinkedIn account even says he helped launch Wikileaks e-commerce store. Now this is connection, but not direct affiliation with anything important including staff members or sensitive documents. While he does have a picture with Assange, this is not proof he has contact with him.

Secondly, there is a bit of weird information about who he is online. First, his account went from saying he was a Wikileaks volunteer to a Wikileaks supporter. Not to mention he has several tweets criticizing those who are asking for proof of life, calling them crazy conspiracy theorists. On top of that he has deleted a recent tweet talking about Assange’s health issues.

Kolisnik has also sent out recent tweets about a 2013 article talking about the FBI illegally interrogating an Icelandic 18-year-old who offered to volunteer for Wikileaks. Is the same thing happening to him? Or is this thing an elaborate scam? Again there is evidence he has affiliation, but what type or his current status at Wikileaks are unknown.

Every Alternate Wikileaks Outlet is Down

Wikileaks has gone through a great deal of trouble to ensure that their information cannot be suppressed by any entity, no matter the size. To do this, Wikileaks has deployed dozens of alternative mirror domains in order to anonymize users and protect the less fortunate from censorship. Now not every single one of these domains listed worked before, some domains are expired or link to spam, which is quite disheartening. Wikileaks, update your list!

However, in recent days supporters noticed every single outlet has gone down. Nearly all 80 domains on the list, as of now, do not load or redirect to spam. At this time, only wikileaks.org.nz works, but actually redirects to Wikileaks.com, making it an alternate entry point not mirror.

People believe this could be related to some of the changes that went on behind the scenes recently. On October 29th, Wikileaks HTTPS certificate changed. Now making a big deal over this would be silly as it could be a simple renewal of their certificate, however, the timing is just a little worrisome.

There was also reports of their IP and DNS changing, which could be the reasoning behind this. We have zero proof of these claims though, and are not going to entertain them. But why did every single alternate outlet randomly die?

Now a lot of people don’t believe a rogue actor would go as far as to fake an interview or even have the capabilities, but there are a lot of odd things going on in Assange’s recent interview with John Pilger. There have been several discussions about how the Pilger interview could have been conducted months earlier, but others found strong evidence pointing against it.

Pilger even recently went on Twitter to clear up that the interview was conducted on October 30th. Now Pilger works for a mainstream outlet, where it’s not uncommon to lie, however, Pilger’s record would show differently. He is, for the most part, been an honest man who can stand by his statements.

While Pilger’s says one thing, the editing of the video may say otherwise. There has been a lot of investigation on this video, people who are claiming to everything from high-end editors all the way down to audio engineers are analyzing cuts. For starters, there are some clearly bizarre edits.

A recent discussion points out the possibility that audio could have been edited in at a later date. Alongside this, another claiming to be an audio engineer dissected the video and found all sorts of cuts and editing morphs. Past discussion actually shows the morphs that occured during the video, as well as discusses how they can be used.

Again, no concrete evidence here, just some damning things that should be brought to light.

What could be going on

Now there is absolutely no way, we the public, have any way of finding out about Assange’s well-being if Wikileaks won’t tell us and we can’t see him. All things that are going to be posted below are pure speculation, but what we think could be going on with Assange.

There are any number of possibilities. Assange has had health problems in the past and was unable to receive medical help. Have these issues resurfaced? Could Assange actually be in poor health due to not being able to leave the embassy? Many have commented on his health complications before.

Assange is a wanted man around the world, especially in the United States. Assange is wanted for, well, opening governments, as the Wikileaks tagline states. They expose the corrupt wrong-doings of governments spanning the globe, of those exposed include the United States. Well, Assange’s Internet being cut around the same time Kerry was in Ecuador is suspect. Also the fact that we haven’t seen Assange alive since before or after that date. Has the Wikileaks founder been extradited?

Is there a possibility of good news? Some have speculated if Assange escaped the embassy and is currently on his way to a safe spot. Wikileaks could be stalling, trying to pose as he is still in the embassy while he flees to a safer area. There could have even been hangups, which is why Assange could be taking so long, as things are bound to go wrong for an “international criminal” trying to escape governments and billionaires.

Now all three of these are pure speuclation. What does Assange have to gain from not proving his life?

Now Wikileaks could be in 100% working condition, but their recent actions need to be taken with a grain of salt. Things over at Wikileaks are not matching up and it’s clear, but it’s also not clear that they have been compromised.

Something is definitely going on over at Wikileaks, but if Wikileaks comes back from this with proof, we cannot start to discredit their foundation. Everything going on could be an elaborate campaign to try and discredit Wikileaks and what they allegedly have in store for Clinton in the coming months. Remember, Wikileaks served us 10 million documents over 10 years with 100% accuracy. These are stats no other news outlets could compare to.

Now back to finding out what happened to Assange and Wikileaks. There are dozens of active communities discussing this, help join the fight over at /r/WhereisAssange, /r/Conspiracy, /r/The_Donald, /r/Libertarian.