If you hear about virus, bugs, or phishing frauds then you might not aware about another enemy named Internet of Things (IOT). The question may puzzle you that what is Internet of Things? According to Gartner, Internet of Things means “Network of physical objects that contain embedded technology to communicate or interact with their internal states or the external environment”.  IOT can collect the user data and companies can use it to make efficient their product. IOT is a rising fourth generation concept that comprises the networking of all devices to perform cohesively as a single unit to make a better life.

Growth of IOT against world population:
Over the past years, we have experienced a huge growth in web-connected devices. If we look at below chart, we can see that in 2003, only 500 million devices were present against the population of 6.3 billion. It means there was a single device per person. In 2010, the world population was 6.8 billion, whereas the amount of device was 12.5 billion means the number of devices jumped from 0.08 to 1.84 in just seven years. Security experts believe that in the year of 2020, the ratio of world population and connected device will be 7.6 billion versus 50 billion devices. 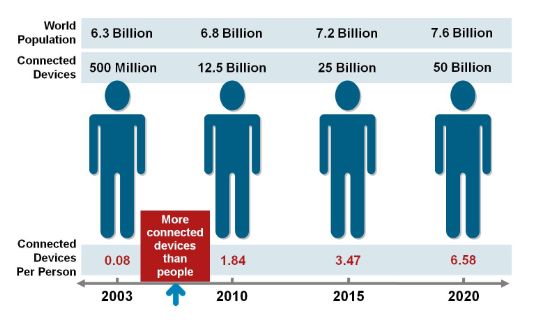 What will you do when your home appliances like refrigerator, coffee maker, electric kettle, or toaster can connect to the internet or web? It might be possible that when your appliances are well equipped to connect to the web, then a security becomes an inevitable aspect of your daily life. In January 2014, an incident of sending spam mail through refrigerator, televisions, and home-networking routers shocked Proof point, Inc., which is a security service provider. The company said in a statement that nearly 750,000 spam mails were sent and these emails were routed via compromised gadgets.

As we know that, there have been always two sides of a coin; the same thing happens in IOT so, first we will look at the advantages. IOT is mostly beneficial in every aspect of human life, especially in health, finance, safety, and daily planning.

IOT can be beneficial for health care system that can monitor the critical signs of patients and can indicate whether the necessary health review is required or not. Doctors can measure blood pressure, sugar level, and thereby alert the patient about the serious condition.

In the part of energy conservation, household devices can perform amazingly, as when the house owner is out of the house the device can set the ideal temperature as well can switch the light on or off just to create the impression on burglars, and prevent them from entering into the house.

Smart refrigerators can track user’s historical trends and behaviors and recommend immediate food supplies those are less in quantity or need replacement. Even wearable technology can track habits of users like sleeping pattern, workout, and blood and sugar level and can connect these data on user’s social media account.

If the connected devices can communicate with each other named Machine-to-Machine (M2M), in that case they can collect individual’s data, share it, and translate the data to make the system more effective.

The main three concerns of IOT is dependence on technology, privacy breach, and loss of jobs. What we share or put on the internet remains forever. In this case, hackers can steal information from such IOT devices. However, there are security measures available for it, but there are still exists a fear of hackers in the user’s mind.

The other concern is breach of privacy. Will we control the IOT? Where information about a user is stored? As we have seen, IOT can collect data regarding personal schedule, shopping habits, medicine intake schedule, and location of user at a particular time. If hackers hack these data, then the breach of privacy emerges. It is assumed that when IOT devices share the information between two devices, then such information should have encryption to avert hackers.

Overly dependence on technology can bring disaster because no system is safe. Whenever your system crashed, you might lose information. On daily base, many bugs occur in the world of internet. The chance of data hacking also remains over the web that can spy and steal your confidential information.

Despite these advantages and disadvantages, we can say that technology is beneficial for the people (not against the people). It depends on organizations and people whether to implement IOT or not. Whether we believe or not, but we reach on a destination where all the things are connected to the internet.It will make people life easier and enterprises can take benefits from such connected devices to make their efficient product and strategy.

Jason Parms is a Marketing Manager at SSL2BUY Inc. He also loves to bring awareness about cyber crime and online security with writing and sharing different articles, press release, blog.