It’s hard to believe we could come across such a story, especially in today’s digital age, but sometimes crazy things just happen in the cyber world.

Sanmay Ved, an ex-Googler and current-Amazon employee said while he was awake one late night searching through Google Domains, which is Google’s domain provider service, he noticed that Google.com was available for purchase. He noticed the domain was labeled available, and he could add the Google.com domain to his cart. 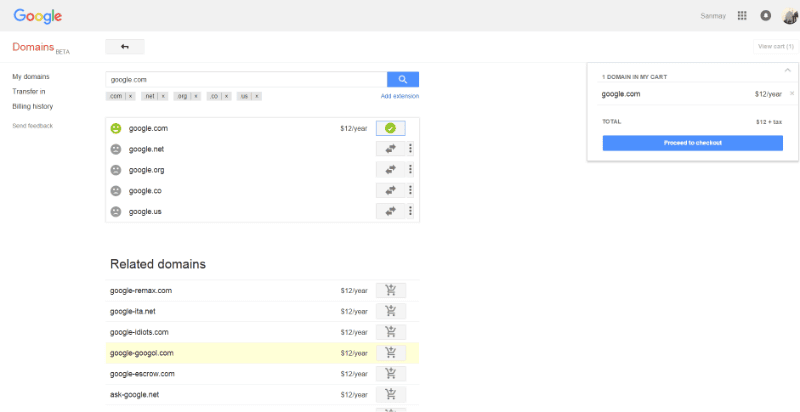 “I used to work at Google so I keep messing around with the product. I type in Google.com and to my surprise it showed it as available,” Ved said speaking with Business Insider. “I thought it was some error, but I could actually complete check out.”

So how much did the web’s most visited domain cost him? A measly $12!

Ved went ahead and added it to his cart, and to his surprise, the purchase went through. Shortly after, Ved’s Google Webmaster Console was flooded with messages related to Google.com. However, following his purchase, Ved didn’t get the usual you bought domain.com, but instead got emails from Google with inside information relating to Google.com, which he chose to not disclose and report to Google’s security team.

“The scary part was I had access to the webmaster controls for a minute,” Ved said in his post published Tuesday, posting screenshots of him within the Google.com ownership panel.

Ved’s run was short lived, as his ownership of the almighty Google.com was revoked just a minute later. Google Domains swiftly revoked the order, refunding him the $12 he paid for it.

“So for one minute I had access,” Ved explained. “At least I can now say I’m the man who owned Google.com for a minute.”

It still remains unclear what entirely happen, but from the looks of it, it appears the company entirely forgot and failed to renew Google.com. Ved said he reported the incident to Google and the company has since acknowledged the incident.

Google is not the first major website to experience bizarre domain problems. Back in 2003, Microsoft failed to renew their Hotmail.co.uk domain, and as a result, someone else purchased it. However, in Microsoft’s case, the company wasn’t able to quickly cancel the order as they weren’t the domain provider and had to wait for the domain to be returned, something Google didn’t deal with as they owned the site providing the domain.

Even though Ved’s venture was short lived, it’s still astonishing he was actually able to purchase the world’s most popular domain and for only $12!

“I can’t shake that feeling that I actually owned Google.com,” Ved said.