The United States Central Command (USCENTCOM) official Twitter and YouTube accounts for military and overseas operations in Central Asia and the Middle East were hacked Monday morning, by a hacker claiming to be associated with the Islamic state militant group, formally known as ISIS.

On the hacked Twitter account, hackers left a link to a Pastebin message that said, “Pentagon networks hacked. AMERICAN SOLDIERS WE ARE COMING, WATCH YOUR BACK. ISIS. #CyberCaliphate.” Hackers wrote another statement on Pastebin that the compromised CENTCOM Twitter account also promoted, reading:

“US and its satellites kill our brothers in Syria, Iraq and Afghanistan we broke into your networks and personal devices and know everything about you.

You’ll see no mercy infidels. ISIS is already here, we are in your PCs, in each military base. With Allah’s permission we are in CENTCOM now.

We won’t stop! We know everything about you, your wives and children.

US soldiers! We’re watching you!”

The pastebin also included a link to a .zip file named ‘US Army Files,’ including images of what some claimed to be a list of contact information for select US Army members, as well as budget documents for 2014.

On the hacked YouTube Account, pro-ISIS hackers uploaded two videos to the official CENTCOM YouTube account, promoting the Sunni Muslim group operating in the same region as CENTCOM at the time of this article. The first Twitter message posted to CENTCOM arrived at 9:30 a.m. PST, while the first YouTube video was uploaded roughly a half hour later. 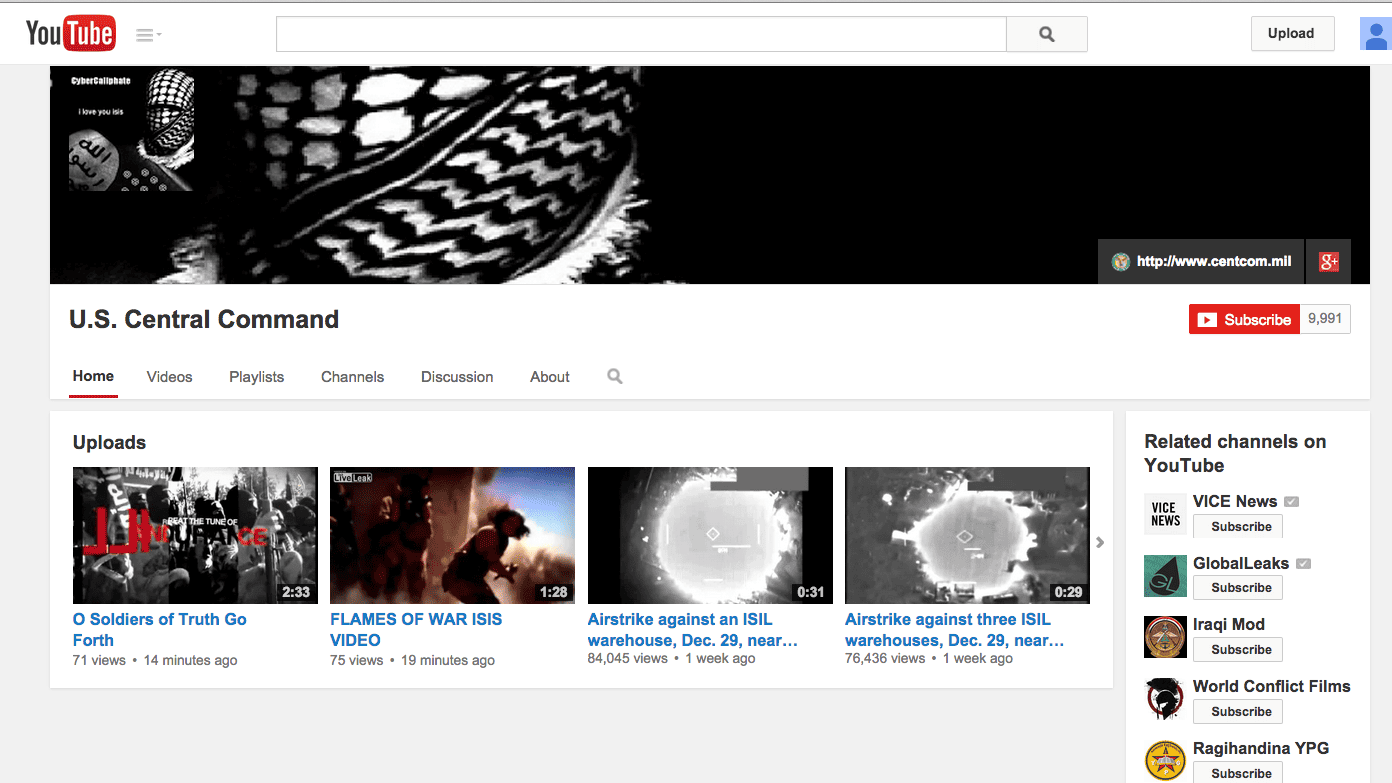 Following the hack, CENTCOM’s Twitter and YouTube accounts were promptly suspended. CENTCOM publicly acknowledged the attack, calling it an act of “cybervandalism.” After CENTCOM restored their social media accounts, they posted the following on Twitter:

Speaking on the attack, CENTCOM published a press release regarding the attack, confirming that no government documents were stolen or leaked online.

“CENTCOM’s operational military networks were not compromised and there was no operational impact to U.S. Central Command,” the release said. “CENTCOM will restore service to its Twitter and YouTube accounts as quickly as possible. We are viewing this purely as a case of cybervandalism. In the meantime, our initial assessment is that no classified information was posted and that none of the information posted came from CENTCOM’s server or social media sites.”

The company has also noted they are working with federal law enforcement regarding the potential release of classified information regarding military personnel, and will take appropriate actions to secure the individuals immediately.

The hack occurred the same day president Obama addressed the grueling cybersecurity issues plaguing American companies before the Federal Trade Commission (FTC) in Washington, D.C. The issues the he addressed announced new proposals towards hacking incidents, referring to those on the devastating Sony Pictures hack.