One of the most well respected torrent sites in the private tracker community, What.CD, abruptly closed it doors Thursday afternoon after an alleged raid happened at their physical facilities. What.CD admins have reported that all the sites data, hosted on servers in France, has been destroyed and is no longer accessible.

What.CD was one of, if not the most prominent music tracker throughout the private torrent community. Gaining the respect of the hundreds of thousands & having massive collections of music the community uploaded in its nearly decade-long life.

While the reason for the abrupt disconnect was not publicly voiced by What admins, they did note that the downtime is likely to be permanent. Upon visiting the What.CD domain Thursday, users were greeted with:

“Due to some recent events, What.CD is shutting down. We are not likely to return any time soon in our current form. All site and user data has been destroyed. So long, and thanks for all the fish.”

And to officialize that this was not a hack or hoax, site admins even went further to confirm it on Twitter as well as Reddit.

Due to some recent events, What.CD is shutting down. We are not likely to return any time soon in our current form. 1/2

All site and user data has been destroyed. So long, and thanks for all the fish. <3 2/2

Everything from What.cd including their mail server, IRC, website & databases are down and no longer accessible.

While What.CD has not confirmed what happened to their servers, French news site Zataz, reported that the Gerndarmerie (C3N), France’s Cybercrime Unit, raided twelve servers associated with the tracker at the French hosting provider OVH. French authorities commented saying a police operation was executed earlier this morning, but did not specifically mention What.cd or any torrent trackers.

According to trusted sources from Zataz, the French music industry group SACEM, basically the French version of the ASCAP, had an ongoing investigation into What.CD for more than two years. No arrests have been made in relation to the site, and it remains unclear if the site database are even readable at this time.

After this story hit many What users worried that their account information may be at risk and in the hands of law enforcement. However, What.CD quickly put users to rest, tweeting:

Reports of our database being seized are not factual.

While there is no proof the server has been seized, a couple of things gotten shaken up right after the OVH server seizure. Shortly after What.CD went down, the ISP & seedbox provider, FeralHosting, also had their front-end site go down.

While FeralHosting is an ISP and own all their hardware, OVH was simply their web host as they could provide sufficient protection against attacks. According to FeralHosting’s admin, they contacted OVH and were told there “was an action instigated by their legal department.” Feral’s owners confirmed that the legal department has not contacted them directly and they are in the process of rebuilding . 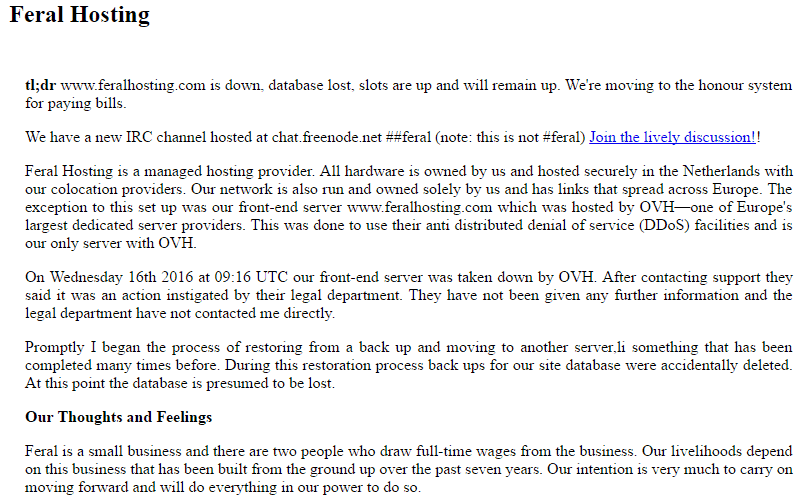 While this is not concrete proof, it gives just another indicator that the servers were likely seized. Even a What.CD admin told Ars on Twitter, “the facts are pretty skimpy right now. We have no official confirmation that servers were seized, but all available evidence does support that, so we are operating as if it is true.”

It’s a sad time to see What.CD have to follow the path of so many other defunct trackers this year, marking this as loosing one of the true icons in the torrent community.

What.CD was birthed in the fall of 2007, just a few days after the demise of one of the largest torrent trackers of its time, OiNK. What.CD provided refuge for some 200,000 trackerless music fans, a safe spot to call home.

Following its birth, What.CD exceeded all expectations in its nearly decade of life, outgrowing it’s once friend Oink, and establishing themselves as one of the top-ranked tracker communities.

It appears today is the day all private tracker fans dreaded, the demise of What.CD, the once and truly great.

Update: A What sister site, Del.ish, also shut down amidst the raid. A small private tracker for food related material. 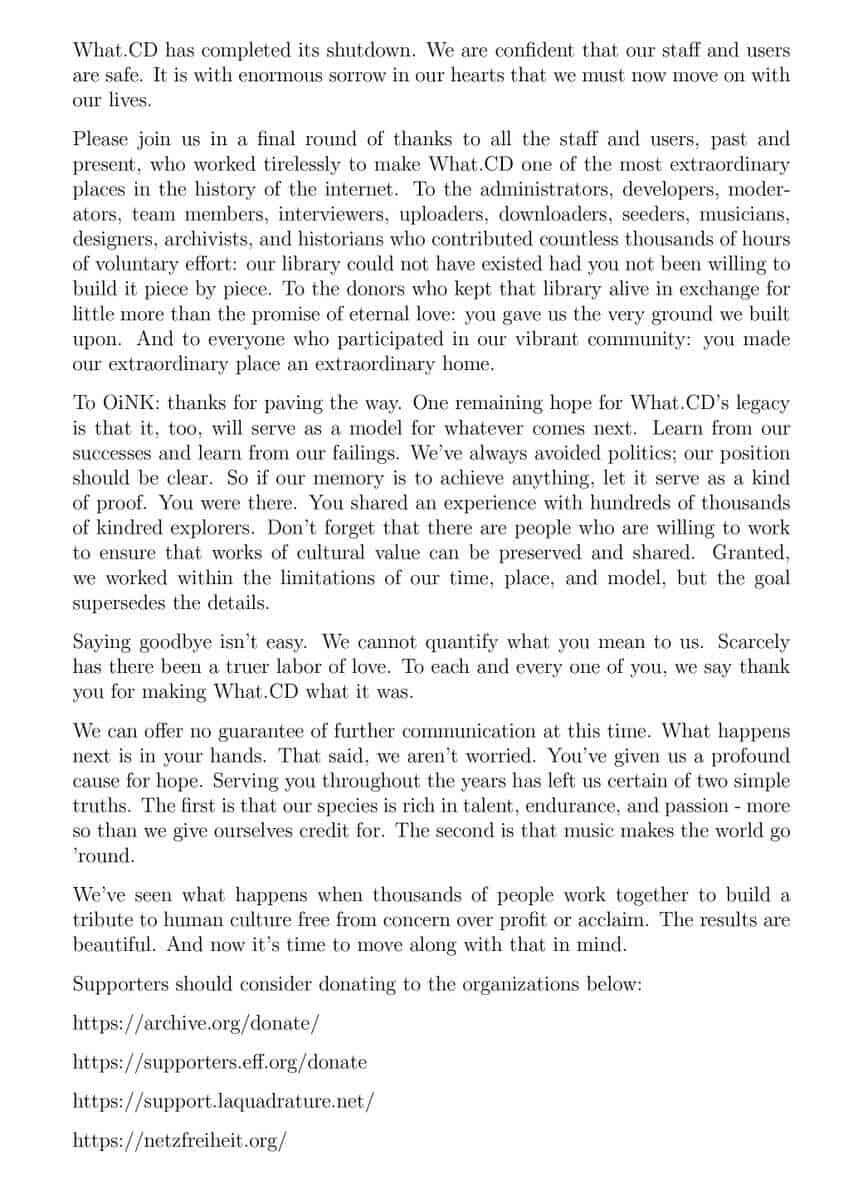