Anonymous Italy has continued to target Expo 2015 with a series of high-scale Distributed Denial of Service (DDoS) Attacks under the collectives Operation Italy (#OpItaly). Anonymous hackers have targeted Expo 2015’s systems and supporting organizations with a series of high-profile cyberattacks for the past few weeks and show no sign of stopping.

Expo 2015 is the current Universal Exposition being hosted by Milan. Anonymous Italy began targeting Expo 2015 to protest against alleged corruption that influenced how the event schedule will run, after plans regarding the event were released. One message from an Anonymous Italy twitter account wrote “In un DDoS non c’è corruzione,” during the two days of attacks, which means ‘there is no corruption in a DDoS attack.’

Once again on May 1, while citizens were in the streets protesting Expo 2015, Anonymous targeted the website’s user portal once again.

Expo 2015 was quick to mitigate Anonymous Italy’s series of attacks, though, the collective continued to launch massive cyberattacks against the company and supporting organizations. Following their attacks, Anonymous Italy published a statement online for the organization regarding the reason for the recent spike in attacks.

“For the record – the site of the online ticketing service has been out all night on April 30 and several more hours on the afternoon of May 1, their habit, to be so petty liars and leads them to lie in the face of evidence, not only, to declare publicly a news is not true and absolutely false to not only admit their utter incompetence. Expect Us !!!”

Following the attack, hackers belonging to the Italian collective of Anonymous successfully defaced a supporting organizations website, padiglioneitaliaexpo2015.com. Shortly after the attack the site was offline and under maintenance. Hackers defaced the website with an anti-Expo 2015 image: 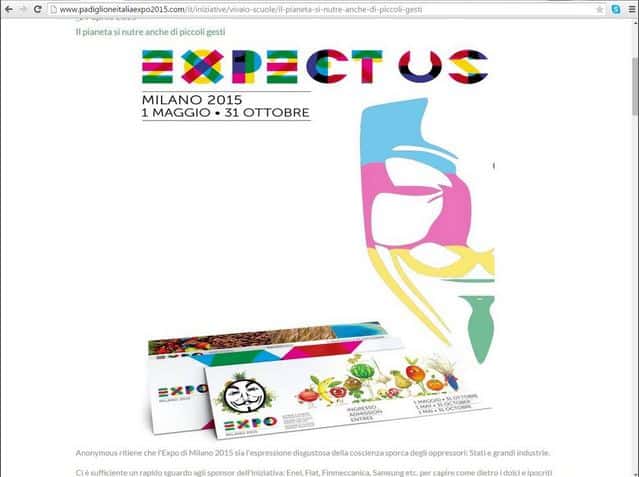 It is clear the amount of data stolen in Best Union breach is critical. Though Anonymous Italy compromised over 1Tb of data, the information will likely never be leaked publicly as Anonymous supports the people, and wishes not to cause harm against us, only against corrupt governments and organizations. If fallen into the wrong hands, hackers could abuse the amass of information to send targeted phishing attacks and compromise user accounts.

Anonymous Italy has continued their targeted attacks against Expo 2015 and will presumably continue til the event is over in October.

[Photo via Stefano Stabile/Wikipedia [CC BY 3.0]]