Following the horrific attacks in Paris last week in which over 128 people lost their lives and leaving 415 injured due to the terror group ISIS, Anonymous hacktivists have declared total war against the Islamic State.

Anonymous hackers published a video on Youtube Sunday, launching operation Paris or #OpParis, where the collective said they will work together to hunt down pro-ISIS channels on social media and every single supporter of the jihadist group online.

The latest #OpParis is in response to the recent attacks in Paris where ISIS set off several suicide bombers and shot hundreds dead on Friday, November 13.

In the Anonymous video published in French, the collective states “Anonymous from all over the world will hunt you down. Expect massive cyber attacks. War is declared. Get prepared.”

“You should know that we will find you, and we will not let you go. We will launch the biggest operation ever against you,” the Anonymous group added. “The French people are stronger than you and will come out of this atrocity even stronger.”

During the Charlie Hebdo massacre back in January, the Anonymous group had been defending French cyber-borders under the #OpISIS hashtag. During #OpISIS, Anonymous hackers defaced, unmasked and reported thousands of ISIS affiliated Twitter accounts.

Prior to Anonymous disabling thousands of ISIS accounts on Tuesday, the group said in a tweet:

“We are upping our game, you will now be hit by major cyber attacks, I will be speaking to all the most prominent #OpIceISIS teams and supporters such as @TheBinarySec, @CtrlSec, @OpIceISIS and we will work together to take down all ISIS cyber communications and your accounts, haha good luck with keeping them.”

Following that tweet, Anonymous disabled more than 6,000 ISIS affiliated Twitter accounts on Tuesday. It’s not clear how Anonymous was able to identify this many pro-ISIS channels in such a short amount of time.

However, just hours after thousands of ISIS accounts went dark, the terrorist group issued five lame tips for group members to not get hacked. 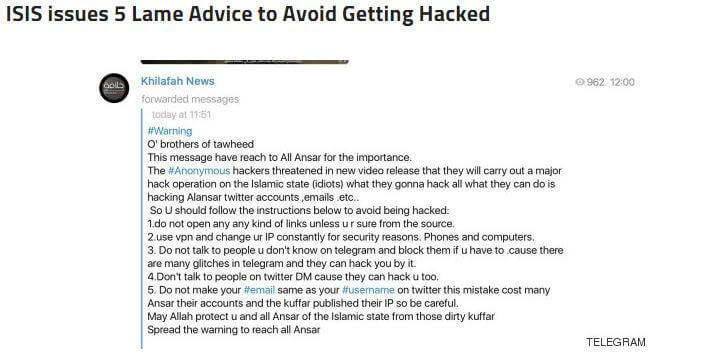 The ISIS group released their five tips on the secure messaging app Telegram, which has since eradicated the pro-ISIS channels. The five tips read:

The hacktivists war hasn’t come without criticism. Olivier Laurelli, a French blogger believes Anonymous disabling pro-ISIS accounts in hindering law enforcement. Laurelli said Anonymous disabling thousands of pro-ISIS accounts hurts law enforcement because they cannot actively monitor the channels. He believes their actions are counter-productive and an embarrassment to law-enforcement who should be monitoring and taking care of these accounts already.

One social media giant, Facebook, wasn’t to fond of Anonymous’s proposed operations. Following the attacks, Facebook promptly disabling pro-Anonymous groups and accounts, which had allegedly exposed a pro-ISIS members identity. No warning was given prior to their suspension leaving them with Facebook claiming the group was a “violation of Facebook Terms of Service and Community Standards.”

Anonymous hackers have continued their operations and are continuing to launch aggressive cyber-attacks against the Islamic State.