British multinational banking corporation, Barclays, has been the recent victim of a terrifying data breach. United Kingdom banking and financial services, Barclays, has been the recent victim of the “worst breach of bank data EVER”, DailyMail reported. Recent reports confirm Barclays banking, had one the worst data breaches in banking history. Barclays financial service had over 27,000 files leaked. Of the 27,000 files leaked, the information contained  customers earnings, savings, mortgages, health issues, insurance policies, passport, and national insurance numbers. The following data could sold on the black market for up to £50 per file (approximately $82.05). Barclays was not aware of the data breach til just the day before reports were released. An anonymous whistle blower contacted DailyMail with a USB stick containing a small portion of the breached data. DailyMail has since contacted Barclays, and Barclays is contacting customers they feel may be in danger. Barclays stated “We are grateful to The Mail on Sunday for bringing this to our attention”.

Barclays files could be used for malicious intent by data brokers, data harvesting, hackers, debt collectors, investors, or social engineers. The files release sensative information that could lead to identity fraud, and malicious targeting. Pictures of what the files contain are down below 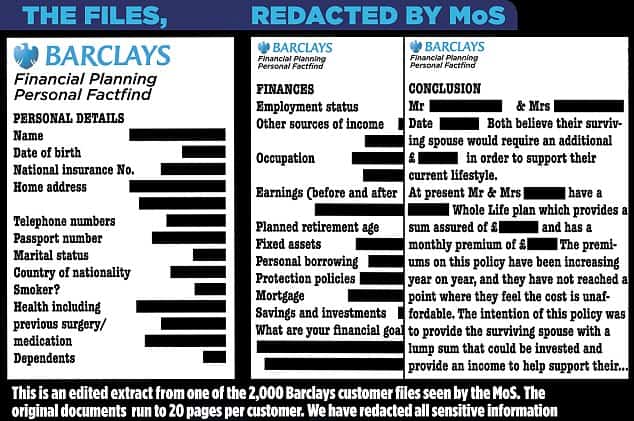 The night after this information was released, Barclays has opened an investigation with the police. If the Barclays bank put customers data at risk, they could risk begin fined £500,000 (roughly $821,000).
The spokeswoman for Barclays Bank stated ”We will take all necessary steps to contact and advise those customers as soon as possible so that they can also ensure the safety of their personal data,”. “This appears to be criminal action and we will co-operate with the authorities on pursuing the perpetrator.”.
The Barclays databreach is a goldmine on the black market for scams, and one of the worst bank breaches in the history of data breaches.