Once again ex N.S.A. contractor, Edward Snowden, has shown the dark and grueling side of the N.S.A. Edward Snowden, the once N.S.A. contractor, is known for defacing many private government spy programs. These revelations are showing the internet and government are not at all what the public eyes see. The horrifying revelations have lead to many increases in privacy, and many new privacy products arising.

Documents reveal that the N.S.A. had been working with the GCHQ on a project known as ‘Optic Nerve‘. The surveillance project was an online one, grabbing still image screenshots every five minutes, from users using Yahoo video chat. Images were then later stored in a database. The project proceeded from 2008 into 2010. In just six months, the program had already collected and stored over 1.8 million images. 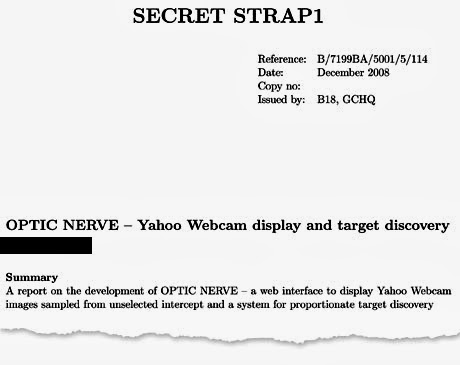 Why did this program even go in place? The document states the agencies were testing facial recognition technologies. Facial detection could identify users online and create more technologies for the N.S.A. and GCHQ to abuse. It appears the N.S.A. and GCHQ are logging your naughty chats and may be identifying your genitals soon.

When The Guardian published the official story and contacted Yahoo,

In its statement to the Guardian, Yahoo strongly condemned the Optic Nerve program, and said it had no awareness of or involvement with the GCHQ collection.

“We were not aware of, nor would we condone, this reported activity,” said a spokeswoman. “This report, if true, represents a whole new level of violation of our users’ privacy that is completely unacceptable, and we strongly call on the world’s governments to reform surveillance law consistent with the principles we outlined in December.

“We are committed to preserving our users’ trust and security and continue our efforts to expand encryption across all of our services.” — The Guardian

And a GCHQ spokesman said in a statement,

“It is a longstanding policy that we do not comment on intelligence matters. Furthermore, all of GCHQ’s work is carried out in accordance with a strict legal and policy framework which ensures that our activities are authorized, necessary and proportionate, and that there is rigorous oversight, including from the secretary of state, the interception and intelligence service commissioners and the Parliamentary Intelligence and Security Committee,” adding, “All our operational processes rigorously support this position.”

“As we’ve said before, the National Security Agency does not ask its foreign partners to undertake any intelligence activity that the US government would be legally prohibited from undertaking it.”

The program seems absolutely absurd and out of control. Not only is this creepy, this is a huge invasion of privacy. While privacy continues to go downhill worldwide, Snowden revelations are making the world aware of these programs in hopes of stopping them.