The days of hacking have been through a lot, but just when we thought we’d seen it all a new group of security researchers have found a way to hack any computer using a piece of bread and a radio. Yep, you read it right, it’s possible to hack a computer with a piece of pita bread you can grab at the local market.

Capturing radio signal emissions is nothing new and is often used in high-profile operations to steal sensitive data from protected computer systems. However, doing so usually requires bulky equipment and a budget no one can afford.

Yet the Israeli-based research team managed to perform the same operation with cheaper consumer-available equipment that was affordable and small enough to hide inside a piece of pita bread.

While using cost-friendly components the team of researchers were able to capture keystrokes, active applications running on the system and even steal encryption keys.

Now how can you hack a computer and steal sensitive documents using this lousy piece of bread? The idea is simple, the attacker must first send encrypted passages of text in an email to the target’s computer and begin monitoring for leaky radio signals when the computer receives the email. The computer should begin decrypting the specific email, allowing attackers to extract the key used to secure data on the machine.

To make such a device, security researchers Daniel Genkin, Lev Pachmanov, Itamar Pipman and Eran Tromer say you need the following components to build the device: 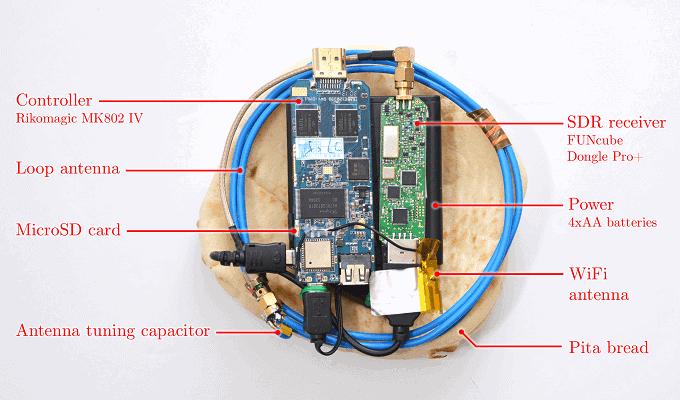 A piece of pita bread fully setup with radio.

The pita bread may seem unnecessary at first, but the bread serves as an essential component in this low-cost operation. The radio device is small enough to fit inside the pita bread, sandwich or other food that would not attract any additional attention. This means instead of lugging around a small scary looking radio that could hijack computers sensitive information, instead, you’re just sitting with a lousy piece of bread, or so it looks.

The Pita method is extremely dangerous as the device is so covert and could easily be passed off as a piece of bread, while unknowingly, there is a dangerous radio crammed inside waiting to steal your documents. The method could allow hackers to easily spy on public figures without their knowledge, however, the attacker has to be within a fair distance, about 50cm (1ft 3in) from the device releasing the emissions.

Using the Pita method, security researchers were able extract the password within a matter of seconds. So next time you see a piece of pita bread suspiciously sitting around, you may want to keep your computer far from it.