Adult Player, is an Android app masqueraded as a pornography app, however once the file is downloaded onto the phone it begins to secretly take pictures of users with the phone’s front-facing camera, a security firm reported earlier this week.

The Android app has all the features of common ransomware, including locking the device and demanding a payment of $500 before the device can become usable again. Security firm Zscaler reported once the app is installed and run on the device, it instantly snaps a photo of the users face using the front-facing camera. Once that is complete, the app will begin to lock the screens device and display a photo of the victim, while demanding the $500 ransom fee to unlock the device.

Adult Player did not make its way into the Google Play Store, but instead spread through a variety of phishing campaigns alongside the developers official website.

Even though the Android app is classified as ransomware, it is not quite as severe as full PC ransomware such as Cryptolocker among countless others.

Adult Player promotes itself as an adult film app, providing access to NSFW films, but instead actually holds the users device ransom, only after the user allows permission to the app.

Once Adult Player takes over, the app goes on to display an alleged warning from the Federal Bureau of Investigation (FBI), stating that law enforcement have identified “forbidden pornographic sites” as the reason for the device being locked. A photo of the application taking over the device can be seen below, the black box is usually where the users face will appear from the earlier screenshot. 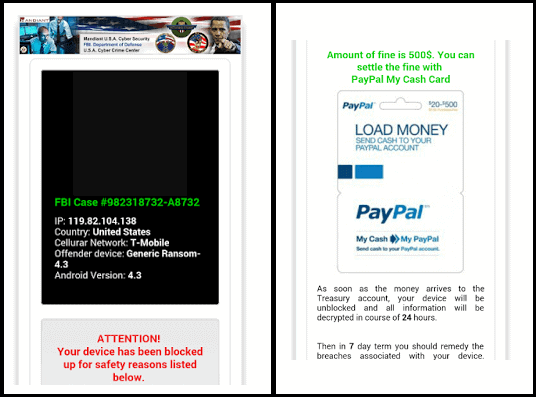 Zscaler security researchers have advised that those who have downloaded the Adult Player app to restart their phone in safe mode, which will allow the Android device to only run the operating system without external applications opening, allowing users to easily delete the malware.

Steps to remove Adult Player ransomware from your device:

Just another reminder on how important it is to not install unverified apps that don’t come from the Google Play Store.