Canadian pop singer, Justin Bieber, recently had his Twitter hacked, and spammed with malicious links. On March 8, 2014 the official, @justinbieber, Twitter page was hijacked by hackers, and used to spam malicious links. The second most followed Twitter account, ranking with over 50 million active followers has fallen victim to hackers.

After the tweets were live for up to 15 minutes, Justin Biebers team responded quickly, deleting all links right away. After the malicious links were handled the team tweeted

all good now. we handled it.

With over 50 million followers, the volume at which tweets spread are viral. The malicious link was retweeted by the followers over 30,000 times with an additional 25,000 users clicking favorite on it. It is unsure how many users are infected with the malicious application, but Justin Biebers team notified users it was not them tweeting such links.

That link from earlier. Don’t click it. Virus. Going to erase this now. Spread the word. Thanks

After the hacking incident, “#JustinsPasswordIsProbably” hash tag is trending throughout the globe. 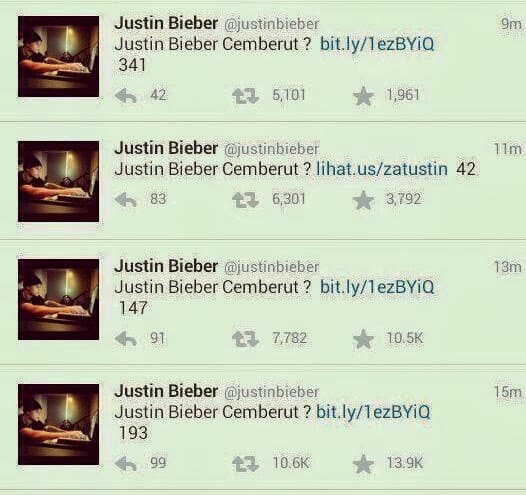