Recent Snowden revelations made the public aware that Angry Birds and other mobile gaming apps leak data to the N.S.A. These leaky apps show a tremendous amount of  personal data to the N.S.A. and other government corporations. On January 28, 2014 a hacker that goes by the name of Anti-NSA defaced the official www.AngryBirds.com homepage. The Syrian Electronic Army notified its followers via twitter of the hack 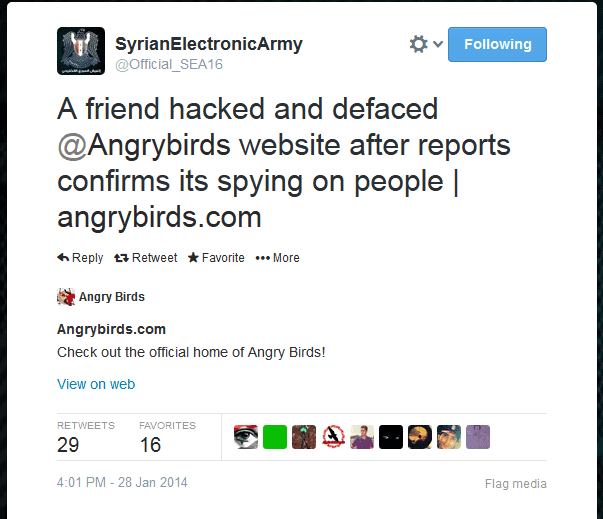 The Hacker News has stated that “NSA is tapping communication across the Internet of all “leaky” apps (Unencrypted app, without SSL connection) to peek into the tremendous amounts of very personal data, including your age, location, sex and even sexual preferences.” While the N.S.A. continues to spy on users and now Angrybird app players, a hacker defaced the website with an AngryBirds logo, stating Spying Birds (along with an NSA logo). The hack was brief but informing the public on the recent reports confirming the Angry Birds app is spying on users.